Don’t be intimidated by the title, we’ll only look at what it teaches us.

On my way home from my Saturday ride, I was surprised to see how busy the traffic was heading into Toronto. On my left, a motorcycle passed. I thought: If this cruiser-riding biker has to make an emergency stop, he’s toast. He was among a line of cars going about 120 km/h, which were all following at about 10 metres — an unsafe but pretty normal sight to see when you’re out riding. Approaching Highway 401, traffic on the 404 often stops suddenly. The cruiser was centred behind the car in front, making it all but impossible for the rider to escape around it should the need arise. The 401 was looming ahead. I hoped, for the rider’s sake, the traffic wouldn’t stop. 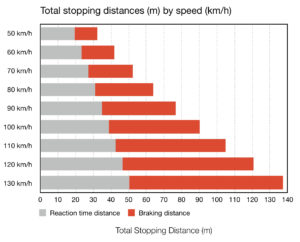 Seeing this reminded me of a passage I read in Bernt Spiegel’s book, The Upper Half of the Motorcycle: The Unity of Rider and Machine. He describes a scenario in which a crash occurs at the front of a line of cars, all following too close. He then creates a simplistic model and does the math to show the effects on the vehicles down the line. I decided to take a Spiegel-like approach, dug out my old textbooks, opened my spreadsheet software, and worked out the math (granted, based on a simplified model) to see what would happen to our cruiser rider if the front car suddenly stopped.

My first order of business was to input the motion equations to make sure I got the same results Spiegel did for his assumptions and data. This would prove that my formulas and assumptions were correct.

What conclusions can we draw from the math that will change how we ride? Let’s have a look.

Spiegel used a speed of 100 km/h, an average reaction time of .7 seconds, a deceleration rate of -7.5m/s2, and a following distance of 15 metres. I changed the data to fit both what I had witnessed and what I learned, based on research, to be more accurate for real-world situations.

In 2000, Marc Green published an article called “How long does it take us to stop? Methodological Analysis of Driver Perception-Brake Times”, in which he reviewed more than 25 previous studies on the topic. He concluded that the real-world reaction time (RT) to brake lights is about 1.25 seconds — more than half a second longer than Spiegel uses. Reaction times as low as .7 seconds are more likely in situations in which the rider either knows or has a very high expectancy that they will have to stop, for example, when being…