Triumph Motorcycles owner John Bloor and son Nick, who heads the company these days, are known for being discreet, let-the-product-speak-for-itself industrialists, who largely disdain the kind of marketing hype that some of their marketplace rivals so eagerly embrace. But still, you’d have thought that, in the midst of 2020’s pandemic-posed problems, they’d have wanted to celebrate the fact that the motorcycle, which back in the mists of time—well, 1994, actually—all but dead-heated with Ducati’s M900 Monster in inventing the stripped-out sportbike streetfighter sector, had smashed through the 100,000 sales barrier. Yes, folks: that’s how many Triumph Speed Triples have been built in the past quarter century-plus of sweeping streets and terrorizing traffic lights, while making such a key contribution to Triumph’s bottom line in doing so.

But despite a substantial makeover in 2016, the Speed Triple has since been seemingly sidelined by the ongoing power struggle (literally!) between its various rivals, with 200 hp-plus outputs—first from Kawasaki via its supercharged H2, then MV Agusta and now Ducati—seeming to be the bar to clear for being counted as a contender capable of serious streetfighting. 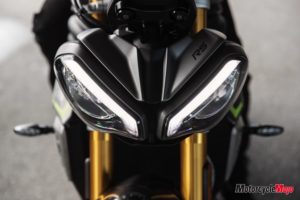 “We knew we had to lift our game, but we weren’t prepared to do so at the expense of real-world rideability on the public highway,” says Triumph’s Chief Engineer, Stuart Wood. “So we focused on providing significantly more power while substantially reducing weight, in order to provide much greater all-round performance than before via a much improved power to weight ratio, from a bike which the widest possible range of riders will continue to feel comfortable [riding].”

So that makes the new Triumph retailing for $19,900, with a two-year unlimited mileage warranty and 16,000 km service intervals, capable of trading power stats as well as prices with KTM’s mental 177 hp 1290 Super Duke R, and the 173 hp Aprilia V4 1100 Tuono. Both of those models retail at almost the same list price as the 2022 Speed Triple.

Available Triumph colours are Sapphire Black, with red and silver graphics, or Matte Silver Ice, with black, silver and yellow graphics—but I must say I think it’s a strategic error Triumph doesn’t have something much brighter and more in-yer-face as a third option for…