One bad decision after another makes for a memorable ride.

I knew it was a risky plan. My ride would end up being a nine-day trip from British Columbia to Ontario, running from the end of September and into October, but I yearned for some adventure, and I had decided that riding the BMW R1250GS — the long-term test bike I had last summer — back to Ontario to BMW headquarters would offer far more enjoyment than simply dropping it off at the closest dealer.

Most times I’m excited to leave on a cross-country ride, but this time, the weather forecast was daunting. There was a huge storm front that had settled onto my starting point of Revelstoke, B.C., and the weather was predicted to be cold and wet all the way east. I packed, and for two days, I watched the weather, patiently hoping it would let up. It didn’t, and I had to hit the road. In addition to dropping the GS off at BMW HQ, I had arranged to meet my parents in Wawa, Ont., a few days later, so I was on a strict timeline. It’s always tough scheduling a meeting some 3,000 km away; even tougher when you want to explore a bit en route.

I set out on a morning that would’ve been much better spent curled up reading a good book and drinking copious amounts of coffee. Instead, I left with wet boots, which got soaked just minutes into the ride, and the knowledge that the most pleasant part of my trip would likely be the comfort of riding the R1250GS — an excellent all-round adventure-touring bike. 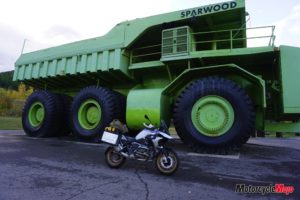 I could’ve easily taken the Trans-Canada Highway to Calgary, and likely would have had far better weather that way, but the idea of slow traffic and being wedged between transport trucks on the highway for hours on end did nothing to inspire me. I rode south along Hwy 23 on the rain-soaked winding roads — undoubtedly some of the best roads in the province.

The chunky tread of the Michelin Anakee Adventure tires allowed me to forget about the pooling water on the roads, and it was worth enduring the weather for the 30 to 60 km/h curves that comprised the road to Balfour. Taking the Balfour ferry to Kootenay Bay afforded me the opportunity to explore Hwy 3A. Because of the 60 km/h speed limit and the minimal opportunities to pass slower vehicles on the road after the ferry, I couldn’t help but think about the riding pleasure that could be achieved if there were no cars at all and if the weather was better.

At Creston I met up with Hwy 3, a.k.a. the Crowsnest Highway. Because…