This small-displacement dual-sport from Kawasaki is worth its weight in fun.

Standing on the footpegs and looking far ahead, I choose my line selectively around larger rocks and glide over smaller ones, as well as the ruts crisscrossing my path, as I negotiate a relatively challenging trail at a pretty good clip. While the 2021 KLX300 I’m riding doesn’t have the power to launch rocks off the rear tire like missiles, with the throttle twisted far enough and in the right gear, it has more than enough gusto to go up the steep incline I’m riding. In fact, it did pretty much everything I’d asked of it off-road, and it did so without a single objection.

The Kawasaki KLX300 replaces the KLX250 of last year and, as its name suggests, it now has a larger-displacement engine. The liquid-cooled single has gained 42 cc through a bore that’s 4 mm larger, now at 78 mm (stroke remains at 61.2 mm). The engine claims a modest 26 horsepower and 17.7 lb.-ft. of peak torque, up 2 hp and 2.7 lb.-ft. on the KLX250. While that increase would seem insignificant on bigger bikes, on the KLX it makes a relatively big difference, especially since the boost in torque is felt at lower speeds.

Throwing a leg over the KLX, even taller riders will find the riding position accommodating, with ample legroom and an easy reach to the wide handlebar. You’ll begin squirming for relief after about an hour on the narrow, firm seat, though. The bike is, however, quite narrow in the midsection, so stand-up riding while on the trails feels natural. The seat is on the tall side, at 895 mm, but the bike weighs in at a scant 137 kg wet, which makes it effortless to hold upright even if you’re on the toes of one foot.

The compact LCD instrument panel offers some pertinent info, such as speed, RPM, time of day, and two trip meters, but it lacks a beginner-friendly gear-position indicator. The display doesn’t have a high level of contrast and is difficult to see in sunlight, especially if covered in a thin film of dust when off-road.

The engine produces more than enough power to pull you ahead of traffic from a stoplight. It pulls strongly from lower revs, and continues pulling in a linear manner to about 9,000 rpm, after which point the power tapers off as you approach the 10,500-rpm redline. The mild output does prompt vigorous use of the six-speed gearbox if you’re throwing the bike around through tighter trails or on twisty backroads, but the shift action is light, with short, precise throws.
On your way to the trails, the KLX will comfortably maintain highway speeds with enough reserve power to make an easy pass, though it is a bit buzzy at the handlebar, seat and footpegs at speeds above 110 km/h. Even with its knobby Dunlop D605 dual sport tires, the bike is stable and confidence-inspiring on the road. 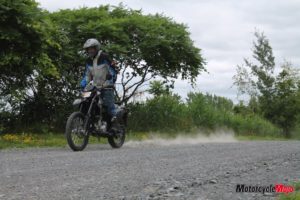 Once in the trails, the KLX rewards with light, easy handling at a modest pace, and it remains surprisingly composed if you wick it up a bit. For a bike on a relatively light budget, the KLX comes with remarkably sophisticated suspension. The 43 mm inverted fork features adjustable compression damping, though the adjuster is inconveniently located at the bottom of each fork leg, below the front axle, and it can get packed with dirt if you’re riding in mud. The shock is adjustable for preload, and rebound- and compression-damping.

As delivered, the stock settings were a bit firm for my taste, so I backed out the compression damping a couple of clicks at both ends, while cranking up the rear preload a tad to raise ride height for my 200 lbs. This improved the ride off-road without bottoming on rougher sections (surprisingly), while providing a comfortable ride on the road without compromising handling in the twisties.

This adjustability is a boon, as it allows the KLX300 to accommodate a wide range of riders and riding styles, which would not be possible if the suspension had fixed settings. The engine is powerful enough to attain speeds that will overwhelm the suspension, but if you prefer to ride that hard off-road, a more expensive dual-sport machine — built for that kind of riding — maybe a better fit for you. 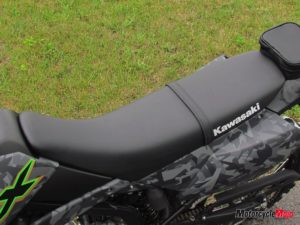 The brakes are adequate on the road, with a firm squeeze needed at the lever to make a quick stop. The trade-off is good feedback that makes them easy to manage off-road. At the front is a 250 mm disc and twin-piston caliper, while at the rear is a 240 mm disc with a single-piston caliper. ABS, however, is not available.

Even while wringing the engine in the upper rev range in the trails and on the highway for most of the day, the KLX300 consumed a mere 3.2L/100 km,
giving it a theoretical range of 240 km from its 7.7-litre fuel tank. If you do your own maintenance — as you should with such a mechanically simple machine — servicing is made easy, with a readily accessible, washable foam air filter located under the seat. Valve-clearance intervals are scheduled at every 12,000 km.
The 2021 KLX300 is somewhat of a hidden gem among motorcycles. It’s versatile enough to handle almost everything except long-distance touring. It makes a great city bike, a capable backroad companion, and it’ll keep going — competently — when the pavement ends. And it won’t break the bank, either. The base price is $6,499 ($200 more for the Camo version tested here).

Probably the biggest caveat is that Kawasaki does not offer an ABS version, like Honda does with CRF300L —though, for me, this isn’t a deal-breaker, since I’d choose it without the ABS anyway. The KLX will easily handle most of what beginner to experienced riders will attempt off-road, while returning grin-inducing performance whether there’s pavement or not…