A bike that continues to dominate the adventure-touring market pays homage to decades of credibility.

I don’t remember getting along with BMW’s R1250GS this well on its press launch two years ago. Perhaps it’s because, left to my own devices — rather than forced to take what BMW’s press department gave me in 2019 — I broke out the old Torx wrench and changed the handlebar’s rake. BMW likes to set its handlebars up so they’re angled optimally for standing up off-road (burnishing their off-road bona fides is critical for marketing to the Gelände Strasse set, I guess). Since I very seldom ride litre-plus adventure bikes off-road — not of my own volition, at least — I angled the handlebars back, and presto: What had previously been a shoulder- and wrist-racking seating position became as comfy as a Gold Wing.

It may have also been the fact that my tester came with BMW’s optional heated seat. Being the middle of summer, I didn’t need said heating, but I’m thinking that perhaps BMW snuck a little more padding in there — or maybe a gel insert — because there was definitely more cossetting than the BMW planks normally supplied. This GS was way more comfy than the last R1250 I rode.

My newfound appreciation for the big GS might have been because, not forced by BMW’s public relations company to sample those aforementioned dirt donk bona fides, I simply stuck to street riding, a far more appropriate environment for a bike that weighs
249 kg, not counting all the luggage I was carrying.

Whatever the reason, when set up and ridden the way I like, the latest GS proved itself more capable — indeed, far more capable — than I remember from the product launch two years ago. Where previously the flaws mentioned above were difficult to overlook, this latest generation of GS finally lived up to its gilded reputation.

That its engine is among the best in the segment has always been without question; this latest ShiftCam version of BMW’s 180-degree twin easily puts the big Boxer’s best foot forward. BMW claims 136 hp for the R1250 and, while that may pale somewhat in comparison to its Ducati and KTM competition, the 1250’s character outshines both. While the Ducati V-twin — I’m talking the 1260 Testastretta here; we’ll be testing the new V4 soon — is lumpy, and the big Katooms just a little too frenetic, BMW’s flat twin is at once massively grunty at low revs and then, thanks to ShiftCam variable valve timing, still manages a serious kick in the pants above 6,000 or so rpm. Roll-on wheelies are a doddle even in third gear.

It’s also much smoother than Boxers of yore. What little vibration there is — the rocking motion caused by the flat twin’s offset connecting rods — is really only apparent when on the gas. Speeding along at a steady buck-thirty, the big twin may not be as vibe-free as a Gold Wing, but only those with princess-and-the-pea sensitivity will have complaints about vibration.

It also sounds remarkably sporty and, thanks to a new Eco mode, it’s also fairly frugal. Indeed, were it not for the arrival of Harley’s new Pan America 1250, the Beemer would get my vote for the best engine amongst heavyweight adventure tourers.

The rest of the bike is, as my Scottish ancestors would have said (imagine a thick Borders brogue here if you will), no’ half bad. The suspension, despite the massive media machine pumping up the benefits of electronically adjustable dampers, is not quite as cosseting as a well set-up pairing of premium forks and rear shock. But the ride is decent nonetheless.

The main issue I have with these electronically adjustable systems is that, once the novelty of choosing between modes wears off, most of us stick to one setting — in my case I preferred the GS’s firmest damping — the rest of the time. The concept of infinite — and immediate — suspension adjustment sounds alluring, but few take real advantage of it.

Much more useful, especially for a bike likely to see such a variety of chores, is the electronic rear preload assist. I futzed — or, more accurately, appreciated the big GS’s computer futzing — with the load-levelling suspension every time I changed my loading circumstances. The automatic load-leveling part of the equation, I think, is fairly self-explanatory; ride-height sensors built into the rear suspension determine the load — rider alone, two-up, etc. — and automatically set the preload to maintain a constant ride height. It’s your basic set-it-and-forget-it option that keeps your rake and trail — and therefore your handling — constant, under differing load conditions.

But I ended up playing with the “Max” option quite a bit as well. For instance, if I was heading into a twisty section and I wanted to sharpen up the steering, full preload was just the touch of a button away. Another unexpected use of electronic suspension adjustment was parking on uneven pavement. If the big GS felt at all tippy on its sidestand, I’d just jack the preload up to Max and the Beemer would instantly heel over.

My one wish would be that BMW would make the ride height control system completely adjustable, so that preload settings could be chosen at the rider’s discretion. Sort of like using a hydraulic preload adjuster, in other words, only with the electronics doing all the work. The hardware is already in place, so this would just require a software upgrade. 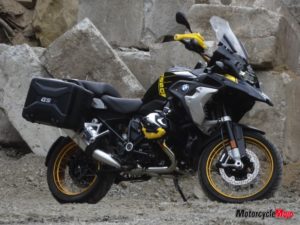 The downside of all these electronics — and gee-gaws like the swiveling headlight and the aforementioned ShiftCam system — is weight: for something that portends to off-road riding, the 1250 version of the GS is a bit portly. This version of the R1250 weighs in at a somewhat hefty 249 kg, and it feels like an abundant proportion of that is on the front end.

Despite its vaunted reputation for world travel, I find the big GS one of the most daunting adventure bikes to plow through open fields. The fact remains that, for 90 per cent of adventure touring riders, long-travel suspension and special Enduro Pro riding modes don’t matter nearly as much as a low weight, and the R1250 is carting too many pounds around.

Move up to Adventure trim — with its huge 30-litre gas tank, bridge girder-sized engine protection bars and loads of suspension travel — and the GS weighs in at 268 kg. That’s a massive challenge to pick up (especially if the big gas tank is full) if you’ve dumped it after a hard day of off-road adventuring.
It’s more than a little ironic, then, to be heartily recommending a motorcycle when you think its most lauded trait — again, that go-anywhere off-road ability — is actually its worst trait. Nonetheless, the 2021 R1250GS has so much going for it. Along with the comfortable seating (when modified), the windshield is the most turbulence-free stock screen in the adventure-touring segment. And the new swiveling headlight is a huge bonus at night —though the high beam isn’t so impressive for something boasting the latest in LED technology.

The handling — in Dynamic mode and, as I mentioned, with the electronic preload Max’ed out — belies its heftiness; the big GS marries excellent stability with sharpish steering. And it must be said that the 40th anniversary’s black and yellow paint scheme — a homage to the R100GS “Bumblebee” of the late ’80s — is quite attractive. 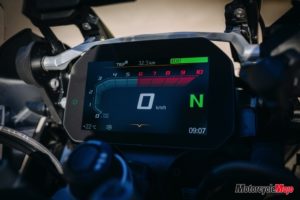 All that said, the unheralded part of the BMW’s charm is how “together” this motorcycle is in all regards; forty years atop the adventure touring segment gives you a lot of insight into what the customer wants. The most impressive aspect of all this experience is how drilled-down the addition of accessories is on the GS.
Unlike pretty much every other motorcycle I have ever tested or owned, all the accessories offered by BMW — and they are legion — feel like they were designed by BMW as the bike was being developed, rather than as add-ons by aftermarket suppliers. Thus navigation system cables disappear like stock wiring, saddlebags mount to frame without odd little adapter brackets and adding fog lights is not a mish-mash of universal wiring.

That might not sound like much, but considering that the Shad top case mount on my beloved Suzuki V-Strom has now shredded two sets of mounting bolts. This could be because Suzuki’s rear rack is poorly engineered, Shad’s mounting system cantilevers the bag too far rearward, or, most likely, both. A little of BMW’s cohesive design would have been welcomed.

BMW’s R1250GS is, despite owners who insist otherwise, not perfect. It’s too heavy, sometimes too complicated and one of its prime and most costly features — the ESA suspension adjustment — is not nearly as versatile in real life as it claims to be in brochures. But it does most things very well and, being the grand-daddy of adventure tourers, BMW has made it as fool-proof as possible.

Experience is an oft-diminished attribute these days. But anyone looking for the best all-round BMW motorcycle would be wise not to discount the GS’s forty years of “wisdom.”…