It’s funny how a simple ride can turn a bad day into a great day.

It was Saturday, 20 degrees, and a perfect day for riding. But I had been ailing with depression-fuelled procrastinitis, so I could only schedule a short ride. I needed to go out and get back so I could finish writing the article I had been struggling to write all week. This is why, on this particular Saturday, I was in a bad mood, on top of everything else.

My doctor told me I shouldn’t ride when I’m depressed. But I’m not so sure. Some people might like to sit cross-legged and om their way to meditative bliss. That’s okay for them. What works for me is the vroom of my V-Strom. My depression doesn’t seem to like motorcycling, because it never climbs aboard. When I’m feeling down, nothing works better than spending hours in the saddle. My worries wane. My senses, deadened from depression, reawaken. I become one with the bike and the world around me.

The engine tells me when to shift. The corner shows me its best line. The asphalt offers up its traction. I am hyper-aware of the traffic around me. My mind, like a sports commentator, sees what’s happening in real time and calls the play, putting me on high alert when a hazard appears. When there’s nothing to process, it works out the world’s problems, or my own, or just ponders curiosities that give me food for thought. And when I get home, whether it’s been 500 km on a single day, or 10,000 km over 21 days, life is better. Way better. At least for a while. 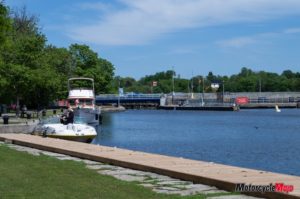 At the stoplight, I had to turn left. As I approached, it turned green, and there was no oncoming traffic. I looked through the turn, chose my line, geared down, leaned the bike, and rolled on the throttle through the intersection onto my route out of the city in a symphony of movement I had, until then, thought only possible by the likes of Marquez or Rossi. I took the corner, not fast like them, but with aplomb and grace. This was going to be a good day. I could feel it. I had an inkling that my goal for a short ride might be at risk.

The eminent psychologist Mihaly Csikszentmihalyi published a book called Flow: The Psychology of Optimal Experience in 1990. I read it 20 years ago. An optimal experience, or flow as he coined it, is one in which you become totally involved in the activity…