Only two broken bolts and a bit of time have forced the permanent retirement of an otherwise solid motorcycle.

Working for a rider training school is a daunting job. Part of my responsibility as an instructor is to teach people who’ve never so much as sat on a stationary motorcycle how to ride one. Plus, I have to teach them to ride safely and responsibly, and with confidence. That’s a lot of work when you’re dealing with about 50 students a week.

My previous background as a motorcycle mechanic means that I also help maintain a fleet of about 50 motorcycles — and that’s even tougher than the teaching. Aside from the regular maintenance, like checking the oil level, tire pressures and lubing the drive chain, I also occasionally deal with dead batteries, oil leaks, fuel leaks, and lots of broken levers and bent shifters. 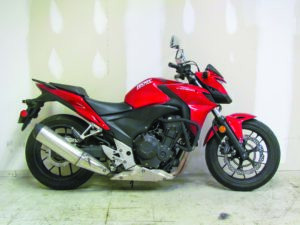 Our older Honda CB450 Nighthawks are used exclusively for closed-course training — they’ve proven themselves bulletproof, and capable of handling hundreds of clutch-riding, shifter-whacking new riders a year without major breakdowns, or melting down while being ridden for hours on end at low speeds in 30-plus-degree heat. We also have a fleet of newer Honda CB500Fs, Rebel 300s and Rebel 500s, which we use primarily for on-road training. Road training is much easier on the bikes, because it doesn’t require them to be continuously slogged around at low speeds while performing difficult manoeuvres; they’re just ridden normally on the road, experiencing perhaps the occasional stall while taking off, or a rare tip-over at a stop. They enjoy an easy life by training school bike standards.

Closed-course and road-training bikes get the regular regimen of maintenance mentioned earlier, and all bikes get a major going-over during the winter. But occasionally, something gets missed. Sometimes a tire is skipped while checking pressures, and is only noticed when it’s visibly soft. Sometimes a clutch cable is missed when making the regular check for free play, and is only adjusted after it tightens up to the point where the clutch begins slipping. But mostly, I manage to stay on top of the maintenance duties and avoid major problems.

That is, until recently. Some of our CB500F road bikes have been lowered to accommodate shorter riders, and even though their side stands have been shortened to allow the bikes to lean enough to avoid tipping over when parked, a couple of the lowered bikes still stand rather upright. So it didn’t raise any alarms when a student had difficulty propping one of our CB500s on its side stand during a mid-ride break; we figured it was just due to the camber in the road. But when we moved the bike to a flatter part of the road, it still barely stayed propped on its side stand. Our curiosity was further piqued when, later, the problem persisted: that same bike absolutely refused to stay on its side stand, as if the suspension was squatting lower than normal. I initially suspected perhaps a broken shock spring, but upon closer inspection, was shocked to discover what the real problem was.

It seemed that, at some point in the days or weeks prior to this incident, the front left engine-mounting bolt — which is also used to mount an aftermarket crash bar — had broken off. The remaining portion of the bolt was still threaded into the engine-mounting nub, and the bolt was rusty where it had broken off, indicating it had been broken for a while. This put added stress on the front right engine mounting bolt, which subsequently broke off, too. I’d failed to notice the broken bolts because they are inside a tubular crash-bar mount, hidden behind a rubber plug. 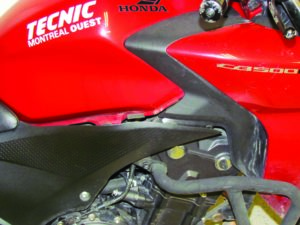 With both forward mounting bolts gone, the frame, which utilizes the engine as a stressed member and lacks downtubes, began to bend at the backbone. In retrospect, this should have been spotted earlier, as the bike’s fork slowly gained rake as the backbone bent. But the frame bending was gradual and happened with time as the bike rode over potholes and bumps. The frame bent so far that the engine mounts were gravely misaligned, the plastic side covers no longer hugged the gas tank, and front gas tank mounts on the frame no longer lined up with the gas tank nubs. Yes, this is catastrophic damage. It should be noted that the broken bolts were not the bike’s original engine-mounting bolts; they were longer ones that were part of the crash-bar installation kit.

Despite its easy life as an on-road training bike, CB500F number 52 has been retired from service. The damage was too heavy to be repaired in a cost-effective manner. I’ve since checked and re-torqued the engine-mounting bolts on all of the CB500s, and the Rebels, too. If you ride a bike on which the chassis uses the engine as a stressed member, you should check them, too.