Immaculate roads and picture-perfect scenery greet the traveller on both sides of the Saguenay River.

So wrote Jack Kerouac in his classic 1950s novel On the Road. And as my 650 Suzuki V-Strom and I boarded a ferry on the south shore of the St. Lawrence River, I had occasion to consider a few metaphors of my own. I was crossing from Rivière-du-Loup to Saint-Siméon, northeast of Quebec City, because I had heard tell of an actual fjord fed by the Saguenay River which, while little known, was in fact one of the longest in the world.

There were few passengers on the ferry, and most seemed to have done this crossing before: in the cabin, they watched the TV news or scrolled through their phones. I, on the other hand, was wide-eyed out on the windy deck, gaping at the approaching Laurentian Mountains. I was standing on my tiptoes, straining to see over the bow of the ship, when I heard a little voice in my head: You look like a silly tourist — are they staring at you? Throwing a glance over my shoulder, I pushed back: When did you learn to be so cool — too cool to be impressed? I stretched a little — an act more defining than it seemed. 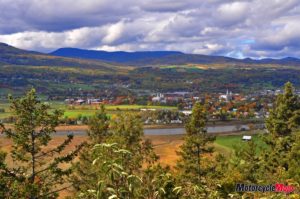 Highway 170 from Saint-Siméon to the village of Rivière-Éternité was a 10: perfect pavement, endless twists, and abrupt elevation changes. This was the beginning of the Route du Fjord, a 300-km loop through scenery seemingly custom made for National Geographic.

At Rivière-Éternité I turned right and followed Rue Notre Dame to the main visitors’ centre of Saguenay Fjord National Park. Created in 1983, the park protects 326 sq km along both sides of the fjord. In tandem, the Saguenay-St. Lawrence Marine Park protects the waters of the fjord and a section of the St. Lawrence estuary, where the perfect blend of salt and freshwater attracts hundreds of blue whales, humpbacks, and belugas, along with numerous species of seals and sea birds. I arrived at the visitors’ centre just in time to observe a warden placing a closed sign in the window. She came out, however, and recommended I visit a lookout that I had just passed unawares.

Returning to L’Anse-Saint-Jean, I crossed the St-Jean River through a covered bridge and climbed a narrow road to L’Anse-de-Tabatière. One hundred and fifty five metres below, the deep dark water, couched between rounded cliffs, flowed imperceptibly toward the St. Lawrence. Seemingly of its own accord, my camera came out of its bag…