An in-depth look at the evolution of the American four-cylinder engine, and a very rare engine that emerged.

In 1897, George Hendee founded a bicycle company called the Hendee Manufacturing Company in Springfield, Mass., and by 1901, he and partner Oscar Hedstrom began installing engines on bicycle frames. This was the beginning of the Indian motorcycle. That makes Indian America’s oldest extant motorcycle company, as it was established two years before Harley-Davidson. In 1923, the company name was changed to the Indian Motocycle Manufacturing Company.

Once the largest-volume manufacturer of motorcycles in the world, Indian’s acquisition by Polaris in 2011 marked the latest chapter in 110 years of tribal turmoil reflecting the roller-coaster fortunes of America’s oldest and most historic motorcycle marque.

Polaris Industries’ then-VP of Motorcycles, Steve Menneto, was the man tasked with making the takeover work. When specifically asked about the chances of a future Indian Four — alongside the inevitable range of new V-twin models wearing the headdress emblem — he didn’t rule it out.

“Indian’s history shows how innovative the brand was in the past, and I can tell you we’re going to take full advantage of that in our future model strategy, beyond what you might expect from the start,” he said. But 10 years on, there’s no sign of a modern-day revival of Indian’s range-topping model during its pre-Second World War glory days, after it acquired the defunct Ace Motor Corp. in 1927. The Indian Four was, at the time, the U.S.A.’s foremost four-cylinder motorcycle engine.

The Early Days of the Four-Cylinder Engine 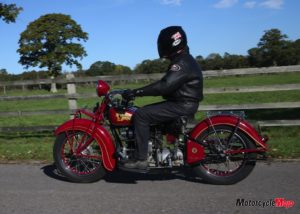 When Scottish-born brothers William G. and Thomas W. Henderson founded the Henderson Motorcycle Co. in Detroit, Michigan, in 1911, their aim was to manufacture a luxurious, reliable four-cylinder machine that was far superior to anything else then available in a U.S. marketplace, which was dominated at the time by often-primitive singles, and more potent (but still evolving) V-twins.

Bill Henderson was one of the finest engineers in America’s early days of motorcycle development, and the quality of his designs arguably outranked anything yet made by a European manufacturer — even Belgium’s FN, which invented the four-cylinder motorcycle in 1904. The Henderson brothers’ products were known as two-wheeled Duesenbergs; considerably better engineered than the contemporary Pierce Four, which hit the market in 1910.

Henderson Motorcycle Co. built 25 examples of its first 7 hp Henderson Four for public sale in 1912, powered by a 57 cu. in. inline longitudinal engine with IOE (inlet-over-exhaust) valves. It was on one of these bikes that Carl Stearns Clancy became the first man to circumnavigate the globe on two wheels between 1912 and 1913. His 934 cc four-cylinder Henderson Model B with fully-enclosed chain final drive covered 29,000 km across four continents in 10 months of hard riding, on what was the longest and…