Discovering first-hand how the pandemic changed travel for the western motorcyclist.

It was the height of the Covid-19 outbreak in the USA. The media was reporting more than 70,000 new cases per day and the border between the U.S. and Canada was shut down.

We didn’t think twice about going for a ride, but we did think twice about where we were going. Originally, we planned to ride east through Washington, Idaho, Utah, Montana, Wyoming and back through the Canadian provinces to the west coast of British Columbia.
In a normal year, we have anywhere from five to 11 guys riding. This year we had three. In a normal season, our ride happens early in July, but, due to the restrictions of the pandemic, we started out riding nearly a month behind schedule. We are living in unpresented times, so much so, we named this ride our Covid ride. 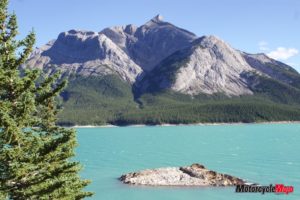 I’m a retired teacher (Yamaha FJR) and myself and fellow Vancouver Islander Dalan Hawker, an IT guy (Triumph Sprint GT), were able to take the ferry from Vancouver Island to the mainland, where we would later meet up with our third member, Wesley MacPherson (Valkyrie and DIY tent trailer), a retired RCMP officer from Saskatoon, Sask.

Hitting Zero Avenue, a road that represents the U.S.-Canadian border along the 49th parallel, we rode east through Abbotsford, B.C., on to Hope, and then onto the winding blacktop of Hwy 3 through E.C. Manning Provincial Park and into Princeton. Four hours later, we stopped for our first night at the Rock Creek Campground, which is 50 km east of Osoyoos. It was here where we met up with Wes. He had already been on the road for a few days, making his westerly migration from Saskatoon to rendezvous with us.

The Best Roads are in Your Own Backyard

In all the years we’ve been riding, our goal is always the same: to find the best roads and scenery available to North American riders. That goal has almost always taken us south into the U.S. The irony is that, while riding through our own country, we were surrounded by all the glories we’d been seeking elsewhere: wide-open and twisty roads, mountain vistas, rolling hillsides, mighty rivers, fish-stocked lakes and an abundance of wildlife. It’s all here, in southern British Columbia and Alberta.

The biggest obstacles on our Covid ride were the long lines outside of Tim Hortons and other fast-food chains. Just outside of Hope we waited 20 minutes in line, in…