Sometimes you just need to ride, no matter how sketchy the road surface.

Hibernation was taking hold again, and the winter months crept onward as I was stuck inside. I’d watch from my window as the toppling towers of snow piled up on the flimsy oak branches in my yard, and each day the trees would attempt to shake the heavy snow to keep their branches from bowing and breaking under the weight.

Last fall, I purchased my first new bike, a 2020 KTM 790 Adventure R. After test-riding one last summer, I felt an unshakeable lust that settled in my thoughts for months; a bike that — for me, in the brief ride I experienced — felt like an extension of every facet of my body. I brought the bike home in November, unloaded it from my truck in the snow, and rolled it into my little shed, fondly known as “the stable.” From my window, as I looked past the snow-laden branches and out at the stable, I started to dream about our first adventure together.

I reached out to Mike Haberoth from Ride North Moto. I had met him at the Edmonton Motorcycle Show a few years before, when he tried to convince me that riding ice roads in northern Alberta and the Northwest Territories during winter was a really “fun experience.” Although the idea sounded a little crazy, it was just the type of adventure I needed. Haberoth works as a firefighter in Fort McMurray, and he also offers medical support at motorcycle events and rallies with fellow first responder riders through Moto Medic. 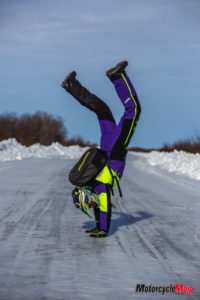 The ice road leading from Fort McMurray to the far north is an integral factor in the survival of remote communities like Fort Chipewyan and Fort Smith in NWT. Throughout the winter months, trucks spend days driving back and forth delivering supplies that will allow the towns to survive through winter and into the summer months. The ice roads are certainly not for everyone and it’s important to be well prepared in wilderness first-aid and have enough resources to travel through the remote area.

The Wood Buffalo Region is an incredibly diverse landscape, and home to Canada’s largest national park, which holds one of the only natural populations of bison in Canada.

As the weeks grew closer, an Arctic cold snap swept across Canada, with Alberta bearing the brunt of its chilly temps, which ranged from -40 C down to…