According to this writer, the RT’s greatest competition might be its GS sibling.

I don’t think it comes as a surprise to anyone that the mercurial growth of adventure bikes has come at the expense of the touring segment. While sales of Adventure Rs and Africa Twins have grown exponentially, the popularity of traditional touring bikes — everything from Honda’s iconic Gold Wing to the once-almost-as-ubiquitous ST1300 — have either languished or, in worst-case scenarios, completely vanished. Indeed, were it not for BMW’s equally-iconic R1250 RT — and the occasional sighting of a KTM Duke GT — sport-tourers would be all but dead. So much so that I think that the aforementioned RT’s most ardent competitor isn’t Yamaha’s long-in-the-tooth FJR1300 or Kawasaki’s outrageous Concours14, but BMW’s own R1250 GS. I’ll go even further: I suspect that the only bike that would-be RT owners seriously cross-shop is its adventure-touring sibling.

It’s little wonder, considering that they really are dizygotic twins. Both, of course, share the same ShiftCam-ed 1,254 cc Boxer twin in exactly the same state of tune. Indeed, in their spec sheets, there’s not a single detail that differs in the entire powertrain until you get to the rear drive ratio — 2.75:1 for the RT and a higher-revving 2.91:1 for the pseudo off-road GS. The rest — cam specs, compression ratio and even the gearbox’s internal gear ratios — are identical. And though not nearly as identical, their frames and suspension hardware — A-arms, swingarm housing, etc. — are similar enough that they would, in the automotive world, be considered the same platform. BMW aficionados will no doubt rebel against such seeming condescension, but underneath all that plastic and gadgetry, the RT and GS are virtually the same motorcycle. On the other hand, as Mark Twain said, it’s the clothes that make the bike.

Protection from the Elements

And the RT, despite its futuristic wardrobe, is classic BMW sport-touring. The fairing is barn door-wide, giving the rider almost complete protection from the elements: neither snow nor sleet is able to keep a BMW R1250 RT (or its rider) from its appointed rounds. In terms of weather protection, the RT rider’s isolation is almost complete.

The GS, on the other hand, is pure adventure-touring minimalism: your hands and most of your body are exposed to those same elements the RT so effectively shields. One of the big surprises of this match up, however, is that it is the GS’s windscreen that most effectively protects the rider’s upper body.
The RT’s shield may be electronically adjustable, but the stock screen is actually quite short (I suspect BMW does this to boost the RT’s sporting bona fides) and, even in its highest position, quite a bit of turbulent air buffets the rider’s helmet. By comparison, the 1250 GS
has the calmest of adventure touring cockpits, and the windshield’s screen adjuster may be manual, but it’s a doddle to manipulate. The RT may offer more overall coverage, but it desperately needs an aftermarket windscreen to make its protection turbulence-free. 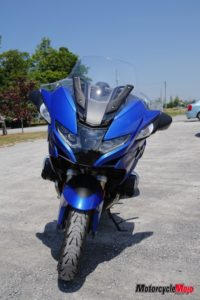 And yet it is the GS that carves the tighter lines — at least at lower speeds. The RT’s relatively stubby handlebar doesn’t offer nearly the leverage of the GS’s Renthal-like affair and, more crucially, all that fairing jacks up the RT’s centre of gravity considerably, all of which makes the RT a little reluctant to turn in at low speeds. The GS, by comparison, is almost eager to dive at apex at low speeds. That 19-inch front wheel hasn’t yet created enough gyroscopic force to be an issue, and its wide handlebar makes turn-in almost effortless. Those looking for manoeuvrability at low speeds will, again, find the GS more to their liking.

Get them up to speed, however, and the RT is much more poised. The ponderousness of second gear almost completely disappears in fourth. RTs have been defying the laws of physics with their high-speed sportbike-like handling for years; the addition of goodies like electronically-adjustable suspension and modern radial rubber have done nothing to diminish its weight-disguising ways.

The View from the Saddle

In terms of technology, it’s most definitely the RT that leads the way. The 10.25-inch dashboard is not only comprehensive in its features but, with different modes and displays available, it’s versatile as well. There’s also a navigation system that can either dominate the screen or be an adjunct to, for instance, the digital rev counter. It is, for lack of a more flattering (to motorcycles) description, automotive infotainment technology brought to the motorcycle dashboard.

The GS’s interface, meanwhile, is also quite bright and colourful, but while it has all the basic information you need, it lacks some of the extras — most notably, the navigation system. The absence of this seems particularly off: the GS is an adventure motorcycle, which would seem to dictate the need to navigate to far-flung wonderlands.

And yet it’s another technology omission that seems more glaring. The RT has, tucked away in one of its fairing pockets, a wireless charging pad. Yup, no USB cables under the seat, or flailing away in the wind because the hookup is in the dashboard. Just tuck your iPhone away in its little cubbyhole and it will be totally refreshed when you get to your destination. Again, since the GS is designed specifically for adventuring — which would presumably bring riders to charging-challenged campgrounds — it deserves something similar. 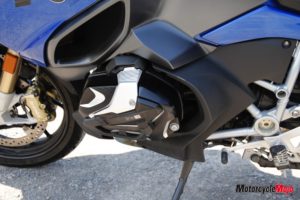 The RT is also blessed with Bosch’s latest radar-controlled adaptive cruise control. One can literally set the cruise control at a specific speed and then, thanks to that aforementioned radar sensor, the RT will automatically maintain a set distance — actually, a set time — from any slower-moving vehicle ahead of you.

In real-world riding, however, I found BMW’s application of Bosch’s technology not nearly as useful as Ducati’s. The RT, in comparison to Bologna’s Multistrada V4, is comparatively slow returning to speed once the road is cleared and, in a similarly conservative tuning, cautious about speeding up when passing.
More noticeably — and, to me at least, surprisingly — I actually found the Ducati’s blind-spot monitoring system, the benefit of a second radar sensor in the rear, very useful. Motorcycle mirrors are notoriously small; having a flashing light to warn you of a car in your blind spot turns out to be quite useful.
In the end, the questions that need answering are: first, would I use the RT’s adaptive cruise control system? The answer would be a resounding yes. But as to whether I would, were I shopping a GS, wait until the adventure bike is likewise equipped, my answer would be an equally resounding no. Were BMW to recalibrate the system and add a Ducati-like rearview radar, that answer might change.

In the Comfort Department

Finally, we come to the comfort question, all-important for anyone looking to rack up the mileage endemic to both sport and adventure touring. And, while both are luxurious in their own way, they go about accommodating their riders in very different manners.

The GS is pretty standard adventure-touring fare, a sit-up-and-beg dirt bike-like handlebar mounted to a two-piece seat with fairly generous butt-to-peg proportions. It’s a pretty comfy ergonomic combination, only marred by what can be best described as a fairly plank-like seat. That’s easily rectified; pretty much every custom seat maker worth his or her gel pad makes a replacement seat for the GS. So improved, the GS would make as good a perch as any to while away the miles. 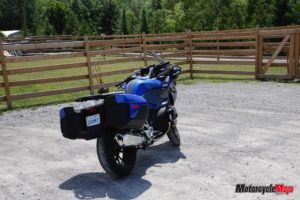 The R1250 RT, meanwhile, has a much better seat, which means the ischium bones — that portion of your skeleton that you actually sit on — are more generously cushioned. The arse-to-peg distance, meanwhile, is a little tighter than its sibling, but still plenty comfortable.

Where the RT falls down is in having a very European handlebar position: fairly far forward and dramatically lower than most North America riders deem appropriate for a bike that will spend most of its time cruising boringly-straight motorways. Tailored for the twisty roads of Europe, I’d suspect that bar risers are as common an addition to an RT as a plusher seat is to the GS.

As for fairing coverage, it’s little surprise that there’s a huge difference between the all-enveloping fairing of the RT, all but eliminating any ravages of the weather while the GS — save for the rider’s chest area and the bottom half of their helmet — is pretty much left out in the breeze. And, despite the vast differences in equipment, riding position and handling I’ve already mentioned, I think that this last criteria is actually the real determinator of when one rider chooses the sport-touring RT and another the adventure-oriented GS.

Essentially, it comes down to this: What matters to you most? Being protected from the chill when the weather turns cold or staying cool when things go all climate-changey? The answer to that question, more than tire size, seat comfort and/or availability of radar-controlled cruise control will determine whether you’re better off on an RT or a GS.