At just 11 years old, this girl already knows her motorcycle inside and out.

She hasn’t yet learned to ride a motorcycle, but 11-year-old Alexis Neill has just completed building her first custom Harley-Davidson. Working alongside her papaw, Roger Wilson, the pair from Granite Falls, North Carolina, took two years to resurrect a tired 1994 Sportster 883. That means she was just nine years old when the project started.

Prior to this build, Alexis says she’d “helped service the lawnmower, and I’d worked a bit on my four-wheeler. After that, I just wanted to build something.” The “something” arrived in the form of the Sportster, a bike that had once belonged to a friend of Wilson’s. It had sat unridden for many years, and, at one point, a barn had actually collapsed on top of the machine. Wilson rescued it and dragged it home. “I didn’t think it looked good,” Alexis says of her first impression, “and neither did my papaw. It was dirty, it had a weird seat on it, and we didn’t like the square mirrors.” 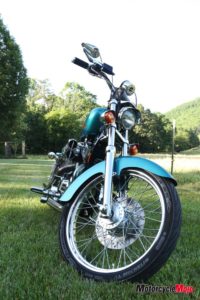 “I was going to go through it and get it set up for her grandmother to ride,” Wilson adds “Alexis saw me getting after it, and asked if she could help. I wasn’t going to pass up some grandfather/granddaughter time, and we made a deal: If she followed through with the build, I’d do everything I could to get her story in a magazine.” As they worked on the bike, though, Wilson abandoned the idea of setting it up for his girlfriend, Joye Bumgarner (Alexis’s grandmother, or mamaw), and opted instead to give it to Alexis.

Wilson has been riding motorcycles since he was 10 years old, starting off on a Yamaha 100. Now, he’s got a 2010 CVO Street Glide, and Bumgarner rides a 2010 Kawasaki Voyager with a trike kit. Alexis lives with her grandparents and is familiar with the layout of the garage, where there’s a chest filled with tools used only for working on motorcycles. “She knows her way around that box, and she catches on really quick,” Wilson says “You don’t have to keep repeating stuff.”

As the Sportster was disassembled, Alexis was all hands on deck when removing nuts and bolts. “If something was too tight, papaw would step in and help,” she says. “I don’t really like getting too dirty, but if it’s for a bike, I’d do anything. And I didn’t really mind getting dirty, because I got to put clean parts back on it.” She literally did do anything, working for an hour or two almost daily after school and on weekends.

The entire Sportster was taken down, with the engine and transmission removed from the frame and placed on the workbench. Engine cases were split, and all bearings and the connecting rods were…