Advice gleaned from experience should always be heeded.

I am not religious. Oh, I try to abide by the Ten Commandments. But I seek no spiritual guidance from above, find no solace in the hereafter and cannot believe that anyone, at least sentient, believes that someone like Creflo Dollar — the professor of “prosperity theology” who has managed to bilk two Rolls-Royces and a private jet out of his followers — is on speaking terms with a deity who claims to rule the universe.

All that said, if a revivalist were to have any hope of converting me to the flock, their best bet would be a church perched atop the Grimsel Pass. Or, truth be told, the Furka. Ah hell, if you are a diehard motorcyclist, the Nufenen Pass right next door is probably equally capable of inspiring divine intervention. Ditto the world famous Stelvio. In a pinch, even the Susten Pass might lead me to reject my sinning ways. But then so might the San Bernardino and the…

The point I am trying to make is that, as far as motorcycling goes, you will never be closer to spiritual nirvana than in the Swiss/Italian Alps. Words simply fail to capture the beauty that is at once awe-inspiring and frightening; both overwhelming and calming; and, most importantly, results in wonderment and reverence no matter how many times you gaze upon the same horizon. Indeed, if motorcycling be a religion (personally, riding a two-wheeler is the closest I will ever get to enlightenment), then its altar is somewhere between Andermatt, Switzerland – the home of the aforementioned Grimsel, Nufenen and Susten Passes — and Bormio, Italy (which lies at the foot of the Stelvio). 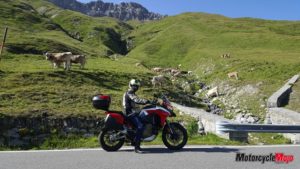 Said spiritual enlightenment does require certain terrestrial practicalities, however. Biking in the Alps is so very different — or, should I say, demanding
— than what we poor North Americans think of as spirited riding. The inevitable language barriers, the incredible ease with which you can get lost and even the mechanics of renting a motorcycle — or insuring your own — are but the tip of the iceberg when it comes to the challenges of setting off on your first Alpine tour.

Now, the easiest thing to do would be to simply join a tour group. And there are plenty — Edelweiss, Ayres and Moto Tours Europe, to name but a few. I have sampled Edelweiss and, for those who prefer to ride in groups, it is a fine choice.

Going on Your Own

On the other hand, if, like me, you’d prefer not to be “organized,” you’ll want to go it alone. So if you are thinking of taking your first motorcycle…