Not everyone travels the globe on the world’s largest displacement, limited-edition street bike.

As soon as I entered Bolivia I wanted to leave. The border leaving Brazil was different to most I had experienced, as it lacked the usual line of trucks belching diesel fumes in my face. It did, however, have the usual flow of cars loaded with family members, bags, and the odd crate of live chickens. Foreigners on motorbikes were unusual, particularly those from the U.K. riding the world’s largest capacity production motorcycle, a Triumph Rocket X, but eventually the paperwork was completed, and I was permitted to say goodbye to Brazil. Rio de Janeiro had become a favourite city on my Round the World trip.

I rode around the corner toward the no man’s land that usually accompanies border posts and could scarcely believe what I saw. An expanse of compacted mud and craters greeted me. I wondered if I had taken a wrong turn and lost the road, but the steady stream of those cars and chickens were making their way through. We all chicaned our way around the holes, crossing from one side to the other, looking for a safe path. 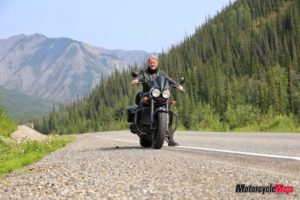 It only took a few minutes before I arrived at the entry point into Bolivia, where I was again staggered by a post-apocalyptic scene. The offices were crumbling, windowless, doorless and almost roofless. I slowed to a crawl to see where I needed to present my passport, but with no one in sight, I entered the country undocumented.

The sun was fading as I stopped in several consecutive little towns to search for a hotel, without success at first, until an attractively named town called Carmen appeared. I rode up and down the main street before eventually spotting a light above a barbecue with a solitary chicken roasting in it. Beyond the light were a couple of plastic tables and chairs. This, apparently, was to be my hotel for the night.

The family were very friendly and showed me to a row of doors in their backyard. I agreed to pay the asking price, which was equivalent to 10 dollars. The chicken meal, served with rice, salad and delicious homemade lemonade, cost me 90 cents. My bathroom had a flushing toilet — not bad — and a single plastic pipe above it in the middle of the ceiling. Either on or off, this was indeed the shower without a shower head. The basin, for brushing my teeth, was out in the yard, guarded…