Unfortunately, even the ride of a lifetime doesn’t always end as planned.

For me, the beginning of a road trip starts when I’m aimlessly looking at a map and something in my mind clicks, thinking, ‘That could be an interesting trip.’ For the next few months, the idea will develop from a simple destination to a vague loop around an area, and then into a detailed itinerary that branches off to places of interest and detours along epic roads. It’s not long before I’m packing my passport into a fully loaded tank bag and setting off on an adventure.
I knew very little about the Balkans. My only knowledge of the place came from seeing it on the news during the devastating conflicts of the early ’90s, and I was too young to know (or care) what any of that meant back then. Now older, and hopefully a tad wiser, I was keen to learn more about this far and distant land. I could’ve just followed how the crow flies and gone directly through mainland Europe to get there, but the journey should be as good as the destination, so I choose a route that started with a ferry from the U.K. to Northern Spain, crossed the Pyrenees Mountains into France, then zigzagged down through Italy before taking another ferry into Montenegro.

My steed would be my trusty 1982 BMW R100RS, modified with a bikini fairing after the original crumbled away. Actually, I don’t know why I’m calling the BMW trusty. Up until this trip it had repeatedly caused me problems, failing on numerous occasions and emptying my wallet faster than all my ex-girlfriends combined.

Aside from its reliability issues, the BMW is indeed a wonderful bike to tour on. The seat is comfy, it can carry large panniers and is stable on most types of roads. The boxer engine delivers plenty of lazy torque and produces an exhaust note which is hugely satisfying, yet somehow inoffensive and gentle through the stainless Keihan silencers. Just what you need when it, along with the wind and the sound of the pushrods on the tappets, is your only soundtrack for 12 hours a day.

Day 1 — Pembroke to Plymouth, Plymouth to Santander via Ferry 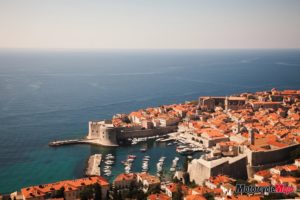 With storm-force winds and precipitation I can only describe as “violently damp,” I set off on my adventure. Having previously cancelled a trip due to similar conditions, I decided this time around I wouldn’t be put off, so I donned my luminous rainproof onesie and pushed on. Despite the torrid conditions, my excitement for the trip made the five-hour ride fly by. Thankfully, I’d booked a cabin on the ferry to Spain, which gave me a chance to dry all my gear and get a good rest for the…