After rides in various parts of the world, it was time for this rider to take on Argentina’s Ruta 40 and the Carretera Austral in Chile.

After numerous road trips in North America, discovering its southern counterpart was the obvious next step. We were drawn to the Andes, Patagonia, the Strait of Magellan and the call of the open sea — and, by the way, we were not at all against the idea of trading burgers for empanadas.

It was early January — the middle of winter in the Northern Hemisphere. Leaving Toronto in -30 C was easy, as was landing in 30 C temperatures after my Air Canada flight to Santiago, Chile. Thanks, austral summer.

At the hotel I met up with Pascal, my old buddy with whom I’ve already travelled across Western U.S., Northern Canada, Alaska, and the Sahara Desert when we were younger. After a good night’s sleep, our rental company was on time to deliver to the hotel the two BMW F800GSs that would be our travel companions. Our motorcycle inspection revealed new tires and just 20,000 km on the odometer — everything seemed perfect. Paperwork completed. Credit card swiped. Contract signed. And we were off. 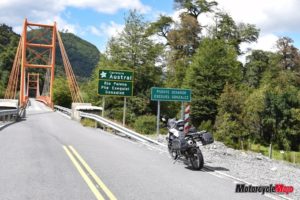 We quickly left behind the bottlenecks and traffic jams of Santiago, heading north on the freeway, which we soon exited onto Route 60, a small desolate
highway in the mountains with stunning mountain passes and hairpin turns — it was great fun, and perfect for getting the hang of the 800GS. The terrain was rocky, the vegetation very low and the climate very dry.

It was our first time crossing the border between Chile and Argentina. There had been lots of paperwork, but the customs officers were very nice. Once in Argentina, Route 60 becomes National Route 7, and at the end of “Tunel Cristo Redentor de los Andes” (Christ the Redeemer of the Andes) is Aconcagua Provincial Park, which offers a splendid view, especially of Cerro Aconcagua, the highest point in the Western Hemisphere, which appeared and disappeared with the terrain and the rise and fall of the road.

The village of Uspallata in Mendoza Province was our first stop. Except for the night we first arrived, we hadn’t made any hotel reservations. We went from one surprise to the next, making last-minute reservations online so that we could be highly flexible with our time and route. In this wine-growing region, it is difficult not to give in to a good Malbec with dinner.

Pascal and I had talked about riding Argentina’s mythical road for a long time, and there we were at last, taking…