Travel into unknown lands can bring unforeseen danger that is so foreign to our safety-net civilization in the Western world.

Having been prevented from entering Tajikistan when half a mountain collapsed onto Kyrgyzstan’s Taldyk Pass moments before we reached it, blocking it for ten days, my son Gareth and I had two options: attempt to negotiate a 150 km-long donkey track across the Alau Mountain Range, or take a six-day detour around the rock fall.

Predictably, high up near the snow line, the donkey track ended in deep scree that tumbled into a river hundreds of feet below, and we had to turn back — but that’s another story.

So, it was the long detour, then…

We continued steadily along fairly good roads, although the fierce heat was a constant and unwelcome presence. We finally crossed into Tajikistan and began climbing the first of two mountain ranges above 3,000 metres that we needed to cross before reaching Dushanbe. We were now on Highway M34. Near the top of the first pass, we came upon the opening of the Anzob Tunnel and were waved to a stop by a policeman. 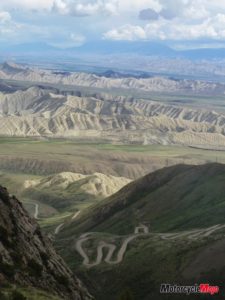 He walked toward us and, after pleasantries had been exchanged, he informed us that, sadly, we were not permitted to proceed through the tunnel. This in sign language, of course — hands gripping handlebars, right hand revving then arms held across his chest in a clearly negating X.

We asked why. I saw our attempt on the Pamir Highway and the Bartang Pass receding once again.

He pointed to some writing engraved in a plaque at the entrance: “Motorcycles and bicycles prohibited from entering this tunnel” he translated in sign language. Gareth asked if there was a road around, a detour, perhaps, pointing at the surrounding mountains and describing a wide loop with his arm.

No, there was no way around. He looked conciliatory and, using his hands, expressively indicated a motorcycle crash, then put his forefinger to his temple and pulled an imaginary trigger. Loose translation: “If I let you two jokers through this tunnel after I have been expressly forbidden to do so (and look, it’s even engraved on stone for all to see) and you are idiotic enough to have a crash, then I’m a dead man. I may as well just blow my own brains out because, if I don’t, someone else surely will.”

As you can see, in my travels to faraway places, I have developed a sophisticated understanding of sign language.

Anyway, we stood around, looking at inconsequential things for a while. It’s best not to rush these things. After riding for days trying to get around the…