An all-round motorcycle with the V4 heart of a superbike.

Have you ever stopped to wonder why we bikers are drawn to Ducatis? Put the question to Facebook and I suspect you’ll get many different answers. For some, it’s as simple as the best of them being irresistibly red. Others will make the argument that, regardless of hue, they’re simply the most beautiful motorcycles (and with the 916 and Panigale as examples, it’s hard to argue their point). Still others will say it’s the engine; their contention is that the Italian take on pistons is somehow more soulful than mere internal combustion. Indeed, the true technocrat will just mouth “desmodromic valve actuation” as if no further explanation is needed.

For me, it’s always been the Ducati appetite for apexes. Slow steering (the aforementioned 916) or quick to full lean (that would be the latest Panigale), 17-inch slick or 19-inch semi-knobby up front, it matters not; if it’s wearing a Ducati badge, you know there’s a certain accuracy of steering that’s missing on most motorcycles. 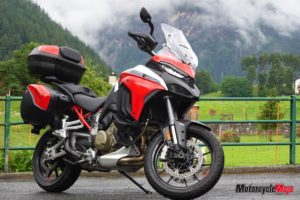 The all-new Multistrada V4S is no exception. Despite housing a seemingly lardy V4 engine — most adventure tourers make do with theoretically more compact twins — and being saddled with the requisite 19-inch front wheel, the big Multistrada needs little encouragementto fling itself into a corner. Oh, it helps if you jack the Marzocchi electronically controlled “Skyhook” suspension adjuster to its two-helmets-and-full-saddlebags rear preload position.

Nor does it hurt, as I found out strafing the Stelvio Pass every morning for a couple of weeks or so, to scooch your butt forward on the seat to get a little more weight over the front wheel. And, if you want the ultimate in V4 Multistrada apex-diving, there will be a Pikes Peak version available by the time the snow melts in the spring.

But, even on the standard V4, bang on the front Brembo four-piston Stylemas to tighten the big Duke’s rake and the V4S will lay over like the son of Hypermotard. It may well weigh a hefty 243 kg, but it still flicks into turns like it’s coming off the banking at Daytona. Tight, precise and ever so eager. For something that purports to be comfortable and easy-going (that’s the “touring” part of the formula), as well having as a modicum of the motocrosser in its soul (that would be the “adventure” part of its segment’s definition), the thing really does behave like it’s a superbike.

The Heart of a Superbike