Two kindred spirits meet up for a lasting relationship.

Around 11 years ago, after the death of my little buddy, student, and friend Peter Lenz, a man named Michael contacted me. In fact, a lot of people contacted me to send their condolences, many having read about my experiences in working with and coaching the young and talented road racer in my long-standing monthly column. The comments were kind and sympathetic, thoughtful and considerate, but one of the emails in particular stood out for me, and that was the one from Michael. 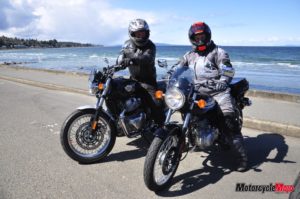 His email read: “As a man in his sixties who has raised several children, I can repeat with certainty and from the bottom of my heart that no parent wants to lose a child, ever. It is in my mind the deepest tragedy a parent can suffer. No amount of condolences can ever take away the tragedy for those closest to Peter, like yourself, but I want to present a tiny moment that I experienced with Peter and how it left me in awe of this young man.”

“A friend and I entered the Roadracing World booth one year, at the Indy MotoGP races. I noticed Chris Ulrich (racing editor at Roadracing World Publishing) sitting at the other end of the long table with a young man who I did not immediately recognize. That young man was Peter Lenz.”

“I wanted to get a poster, but noticed that Chris and Peter had become involved in a deep and complex discussion. Not wanting to interrupt or stop it by walking closer, I stood back and watched and listened to the snippets of conversation that I could catch. It was an awesome sight: Chris, ever the teacher, gently suggesting possible solutions and Peter’s mind obviously mentally racing through the various scenarios and giving a running commentary at the same time. They were locked in a discussion that gave off this powerful energy, like momentary binary stars. When I watched these two, the image that flashed through my brain was one of a ‘Top Gun’ and his instructor discussing complex flight maneuvers.”

“I can tell you with absolute certainty that we all will meet certain special people in our lifetime. I call them ‘bright lights’ because compared to us ordinary mortals, these people shine. If you have eyes for seeing and recognizing ‘bright lights,’ you realize that there are not many of them. Peter was definitely a ‘bright light.’ I could see it and feel it from 10 feet away without knowing much about him. I was truly in awe of the moment as it was occurring, since it was so special. I know that there were lots of opinions about Peter and his racing career after the incident. Still, when the U.S. military loses one of its ‘Top Guns,’ even in a training accident, there is only grief and sorrow and support.”

“I should tell you, Misti, that I have been a devoted fan of your Motorcycle Mojo writings from day one. I learned about push bikes and watched (or read) as you raised a family while remaining so passionate about so many aspects of motorcycling. Thank you for the bright light that shines from you as well. Sincerely Michael”

I responded to his message, extremely touched by the fact that he noticed Peter as a “bright light” and attributed a similar shine to me. He seemed to understand me via the columns I had written, and his note offered just the right amount of support and encouragement. 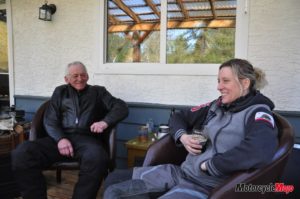 Well, that day, a friendship was formed. We became modern-day pen pals, as it were. He lived on the other side of the country, in Toronto and then Nova Scotia. We connected here and there, and along the way, he shared some fantastic stories of his motorcycle adventures.

Recently, Michael messaged me to say he was driving across Canada, that he would be reaching the west coast in a few days and asked if I was comfortable enough to meet face-to-face, and I said, “Of course!”

I was super excited. After more than 10 years of correspondence, we finally met in person in the sunshine in North Vancouver, and it was nice — like, really nice. He has some amazing stories, had his old 2003 R1 stuffed in the back of his pickup truck, swears often, breaks rules, and gave me the best piece of advice that could have been given on that particular day. He said, “You are a bright light, and the best thing that bright lights can do is just shine.” We vowed that the next time we met, we would both be riding motorcycles.

Just one week after meeting Michael for the first time, I took the ferry over to Vancouver Island to visit my sister, Summer, and pick up a new-to-us KX85 for my son, Ashton, with the intent of meeting Michael for a motorcycle ride. Summer, her boyfriend, Kevin, and I planned a ride from Parksville out to Tofino for some tacos and back and invited Michael to join us. On the morning of the ride, we woke to zero-degree temperatures and a forecast that listed the high at around 6 C.

Did that stop Michael? Nope. At 72 years old, he didn’t skip a beat. He jumped on his R1 and drove up in the cold from Victoria to meet us. After sitting by the fire for a bit to allow his frozen fingers and toes to heat up, we determined it was too cold and the weather forecast too bleak to follow through with our ride to Tofino. Instead, we decided to do some local backroads and to make it a more social visit instead.

As we took off for our first ever ride together, Summer and Kevin in the lead, then me and Michael riding at the back, I noticed that he kept falling back a bit and then zooming up to join us, sometimes even popping little baby wheelies. As if reading my mind (I was thinking, “I hope this guy isn’t a stupid street squid that’s going to take me out on this ride”), he zipped up to me at the stoplight. Lifting his visor, he yelled, “We didn’t really discuss group riding, so let me just tell you that that area, from the yellow line to the edge of the road and back a bit is your space, and I will never intrude on that imaginary square of space around you. Never.” I smiled in my helmet and trusted him completely. 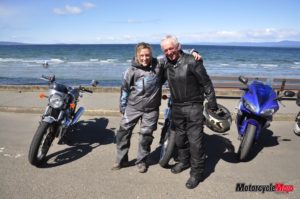 We took pictures and swapped bikes, Michael eager for me to try his beloved R1, which reminded me of my old-school hooligan riding days. We laughed and talked and got along as if we’d been best friends for years. I could practically see his eyes twinkling with delight through the visor.
At the end of a perfect day, we sheepishly said goodbye as he climbed on his bike and prepared for two more hours of cold riding back down the island. When I commented on the cold, he told a little story:

“There was this time I was out riding, and this huge rainstorm came out of nowhere. I pulled into the gas station to take a break, and there was this arrogant-looking man in a sports car cowering from the rain. He looked at me and said, ‘Must suck riding a motorcycle in the rain like that.’ He sounded like a prick, eh? So I put my helmet on and said to him, ‘Hard core. Don’t care.’ And I took off into the rainstorm.”

We laughed, wanting to freeze time and hear more of his wild stories, but it was time for him to go. He says he’s just a “regular mortal,” but I think he, too, is a bright light.

He looked at us and said, “Hard core. Don’t care,” and took off. I can’t wait for our next ride together!