The next stage in the line of Big Boxer variants.

One year ago BMW Motorrad defied the global pandemic by introducing the first in a new family of Cruiser models, addressing a segment that the German company had spent the previous 16 years — since production of its R1200C Custom model ended in 2004 — studiously avoiding. But with Cruisers dominating sales charts in the U.S., the Western world’s No.1 market, BMW Motorrad CEO Markus Schramm felt this was a sector that could no longer be avoided in BMW’s quest to topple Harley-Davidson from its global leadership in the premium motorcycle sector. “But we must try doing this our own BMW way,” he insisted. “We never copy anyone, and that applies for this segment as well. It must be an authentic BMW.”

Hence the BMW R18 Big Boxer Cruiser and its windshield and saddlebag-equipped R18 Classic spinoff, both of which entered production a year ago, and have since sold well, according to Schramm, with more than 4,000 examples delivered globally, especially in the U.S., China and Germany. But now comes the heavy brigade — in more ways than one, with the R18 B (B for Bagger) and its R18 Transcontinental full-dress Tourer sister bike hitting dealer showrooms as 2022 models, both of them faired variants of BMW’s Cruiser platform with the exact same engine as the original R18.

True to its Roots 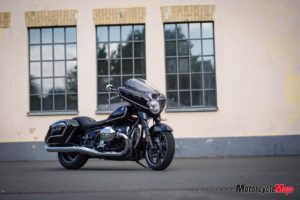 The chance to ride the R18 B in Germany on a scenic, switchback 255 km route through the hills and valleys of the Taunus Mountains north of Frankfurt revealed how BMW is attacking the largest individual sub-sector of the Cruiser market with a Bagger not like the others — and not only because it declined to join the Cruiser crowd by building a V-twin motor, but instead remained true to its roots by developing the R18 Big Boxer powerplant, the largest-capacity flat-twin engine the company has ever built. BMW has specifically termed the model sector which this engine was designed to serve as its “Cruiser Touring” segment, and the two new faired models are the first bikes to address the second element in that label.

While the fairing parts the air smoothly and protects your hands from wind blast, the airflow over the short windscreen does hit your helmet, and in my case, at 5’10” in height, it was turbulent enough at speeds of 120 km/h or more to be annoying. The non-detachable but centrally locked twin bags look great and are well-made, so presumably are water-tight, and both open and close easily via pop-up levers. But they’re also fairly…