My compass points north, so north my summer ride would be, on a route to places few have been. I had heard of mythical tales of riders reaching the salty waters of the Arctic Ocean via James Bay, but never actually met a motorcyclist who’d made the trek. Covid had closed the southern U.S. border and blocked foreign travel for another year! So, this summer, my ride would be north to upper James Bay.

I wasn’t sure it was a great idea for a solo ride, so I hooked up with two friends: John, a retired Federal Ocean scientist now big into fighting global warming; and Dean, a psychologist friend I work with at my university. Dean, a reincarnated (after more than 30 years off the bike) but novice rider, was on his new Suzuki DR650, and I rode my trusty 2015 Suzuki V-Strom 650XT. We rode from Kingston, Ont., to meet up with John, an experienced adventure-touring rider (also on a similar Suzuki V-Strom kitted out for adventure touring), whose starting point was Owen Sound, Ont. 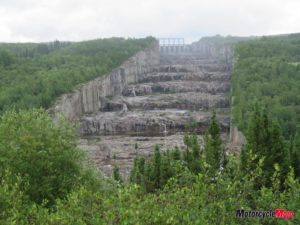 We arrived at Sundridge, Ont., the “Pearl of the North,” about an hour south of North Bay, just before our first big storm hit — a harbinger of intermittent storms for the first six riding days. The next day was rain pretty well all day, as we headed north by northeast via North Bay, through New Liskeard and then into Quebec through Rouyn-Noranda — and, because of a severe weather warning (wind, rain, hail — the warning had it all), we bailed on camping. We settled for a one-star (actually two stars but someone had torn one off) hotel in the seedier part of Val-d’Or, where three rooms came to about the same price as camping. Perhaps that’s enough said — we will have mixed memories of our Val d’Or accommodations for the rest of our lives.

The weatherman looked after us as we headed due north to the village of Matagami, where we gassed up after heeding signs for no service for the next 381 km, and started at km 0 of the famous James Bay Road (Route de la Baie-James). The James Bay Road, completed in 1974 and paved by 1976, is the longest municipally-owned and maintained road in Canada (620 km) and serves the largest municipality in the world (Municipality of James Bay covers 350,000 sq. km). The road was built by Hydro Quebec to service the huge network of dams and hydroelectric generating plants of the massive James Bay Hydro complex. The indigenous peoples refer to it as the Billy Diamond Highway, named after the Chief of the Waskaganish, who negotiated the James Bay agreement on behalf of the Cree Nation with…