A quirky combination of the thoroughly modern and totally retro.

Methinks Harley-Davidson is fibbing a little. Not a lot. Just enough to make those paying $20,999 for its new Pan America adventure tourer think they are getting more of the Revolution Max magic than those paying just $17,999 for the even newer Sportster S.

According to Milwaukee, you see, the Pan Am’s version of the Revolution 1250 pumps out 150 horsepower while the Sportster S’s tuned-for-torque version boasts but 121 Shetlands. That is, before you reach for a calculator, a deficit of 29 horses.

On the Brooklin Cycle dyno, however, the Pan America’s high-revving 1,252-cc V-twin pumps out 131 rear-wheel horsepower while pretty much every published dyno run I’ve seen of the new Max-motored Sportster pegs its maximum output at 111 or 112 horsepower. That — again, saving you the flicking of a keyboard — is a deficit of 19 or 20 horses. In other words, someone is dissembling. For my two cents, I think it’s Harley-Davidson, and the new Sportster S is actually more powerful than claimed.

Whack the throttle from idle in third and it’s the Sportster that feels more spry. I suppose that’s to be expected since Harley does say it revised the cam timing for more low-end grunt and the new Sportster is some 14 kilograms lighter than even the most basic, non electronically-suspended Pan America.

But then the Sportster version of the Revolution Max 60-degree twin also feels more powerful in the mid-range. In fact, almost until the rev limiter kicks in — somewhere around the 8,300 rpm mark — the Sportster feels more energetic than the supposedly more powerful Pan Am, the adventure tourer’s main advantage seemingly the extra 1,000 rpm its ignition timing allows before safety nannies kick in. 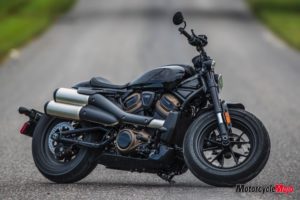 In fact, so well does the Sportster version respond to throttle that, barely a year after I said the Pan Am’s twin was my favourite engine in motorcycling, I now have to rescind that accolade and pass it on to the Sportster S’s version of that same Revolution. That may seem like but a minor quibble, but since I am in the market for a new adventure touring bike next summer, I would like to advise the boys from Harley that their best chance of loosening my wallet to the tune of 30 large would be to build me a one-off with the Sportster S’s engine supplanting the stock, higher-revving version. Hell, the Sportster version even feels smoother than the Pan Am’s. Seriously, if the Livewire and its electric motor becomes the future of Harley powertrains, what an excellent way to punctuate more than 100 years of internal combustion.

Indeed, any issues I might have with the new Sportster are not with its wonderful engine, but with the compromises Milwaukee has made to…