Adventure and hospitality in Ontario’s north.

The 300 kilometres from Ignace to Pickle Lake began as an excellent tar and chip route that rose and fell through forested Crown land. Soon, alder and willow began to crowd the diminishing road to obscurity — not unexpected on the most northerly paved road in Ontario. Less expected was when my travelling partner, Cliff, and I happened upon Savant Lake, a settlement comprising a Post Office (in a house), one hotel with dining lounge (both closed), and Ennis Grocery & LCBO, which offered food staples, children’s toys, two shovels, a rake, one love seat, a picnic table, one mattress (Queen), two CRT TVs, and live minnows in an aerated tank.

As our Ojibway server made us a cup of coffee in her personal Keurig, I noticed a window sign turned inward: “Closed for Lunch.” And another, “For gas after hours, see Dennis at the hotel, or call 584-2253. Fill-ups only.” Above the door two tattered flags waved in the breeze: The Maple Leaf and, by the way it was torn, the “Stars and Strips.”

Back on the road, we scared a bald eagle from its breakfast of fresh skunk. And then the construction began. Ninety-one kilometres (I clocked it) of variable loose gravel and sand that had me mentally reciting past riding lessons: get up on the pegs, hug the tank with your knees, hold the bars loosely (like eggs), keep up your speed. The Ministry of Transportation thus furnished us with an added level of excitement we had not foreseen — and a modest display of bravado — when we emerged with all bones, farkles, and fairings intact. 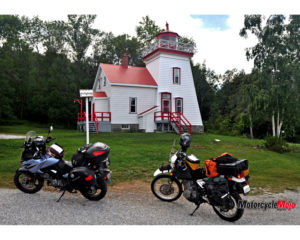 Pickle Lake was a much larger community of 425, with one hotel, a convenience store, a surprisingly large school, and a municipal park, where we had lunch next to a bush plane overlooking the pristine waters. Pristine, in fact, is a good word to describe much of this northern expanse. Over the course of several days, I noticed a total of one discarded Coke bottle. And while the logging operations put a dent in the beauty, there were still vast tracts of wilderness filled with black spruce, poplar, jack pine, and red and white pine.

Were it not for the road before us, I could have been convinced that we were the region’s first human explorers. I particularly enjoyed the fact that Cliff, with his background in forestry, was able to identify every tree, bush, bird and animal we saw — often with its scientific name.

In Sioux Lookout, where we intended to wild camp, locals alerted…