A true adventurer’s bike that’s as competent on long highway trips as it is on the trails.

Many people probably don’t know this, but Husqvarna has been making motorcycles for as long as Harley-Davidson has. However, while motorcycles began rolling out of the factory in 1903, the Swedish company is, in fact, much older than that. Like a few other historic motorcycle makers, it began by manufacturing other products: it was founded in the 1620s to produce firearms — the company’s logo is actually stylized gun sights. The Husqvarna name can be found on power equipment, industrial machinery, vacuum cleaners and sewing machines. The branch we’re interested in — the motorcycle division — was sold off in 1986 and has traded hands a few times since. In 2013, it was acquired by Pierer Mobility, which also owns KTM. It is this merger that has brought about the Husqvarna Norden 901.

The Norden 901 is Husky’s first adventure-touring motorcycle, and it’s closely based on the KTM 890 Adventure. It’s distinguishable from its KTM counterpart by less angular, Dakar-inspired styling, with a large, round LED headlight and a pair of driving lights in the fairing. Husqvarna did a fine job with the styling, which not only sets the Norden apart from the 890 Adventure, but to me it also looks better. It’s also designed to cater to a different type of rider, which is something we discovered while riding the bike on and off road in the beautiful and remote Portuguese Azores. 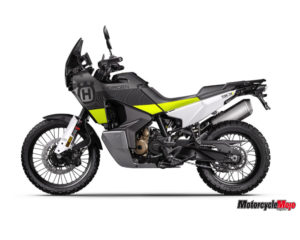 The two bikes share an 889 cc liquid-cooled parallel-twin, and they’re in the same state of tune, producing 103 hp and 74 ft-lb of torque. Engine internals are the same, incorporating vibration-damping twin balancers. Dell’Orto provides the ride-by-wire fuel injection, and the engine drives a six-speed gearbox through a mechanically-assisted slipper clutch. Shifting is assisted by a bi-directional quick shifter; Husky calls it Easy Shift; KTM calls it Quickshifter+ — it’s the same system.

The chrome-moly tubular-steel frame is unaltered and features the same steering geometry as the 890 Adventure, and tubeless spoked wheels come in off-road-friendly 21- and 18-inch diameters front and rear. Brakes on both bikes are by a Spanish company called J.Juan, which has been producing braking components for MotoGP for several years and was recently acquired by Brembo. The brakes are supersport-spec, with two radially mounted four-piston calipers squeezing 320 mm discs up front, and a twin-piston caliper acting on a 260 mm disc in the rear. But then, Husqvarna starts to mix things up a bit.

Aside from the drastically altered styling, the Norden has many other things that differentiate it from its KTM counterpart. While the Norden uses similar WP Apex suspension components, the bike boasts 220 and 215 mm of suspension travel front and…