Janiebelle and I were perambulating smartly about our neighborhood recently, in her lightly mauled 14-year-old Toyota (my money is invested wisely: on motorcycles) when my moto-senses started tingling. As we passed through an intersection, out of the corner of my eye I caught a flash of something quite unusual. Executing an immediate Bat-turn, she took me back to my prey. There, on a deserted tree-lined street, no-one around it, sat an immaculate 1941 Harley-Davidson Servi-Car nosed into the curb.

I immediately ejected myself from the automobile and began my examination. Except for one plastic-coated wire, it looked like a brand-new ’41. Eventually, a gentleman named Tom Lucas emerged from a nearby backyard and claimed ownership. Possession being nine tenths of the law, I considered fighting him for it, but he looked pretty fit. Instead, I asked him what the trike’s story was.

“My grandfather had a ’39 for his Dodge and DeSoto dealership in Vancouver,” Tom says. “This is as close as I could get to an exact replica, based on pictures. He used it for picking up and dropping off customer cars, but mainly he used it for service calls. That’s how he ended up at the Supreme Court. It made headlines across the country. A local guy made a documentary film about it.”

That didn’t sound like the average Servi-Car collector story, so we made arrangements to meet again for some pictures and for me to get the full details. 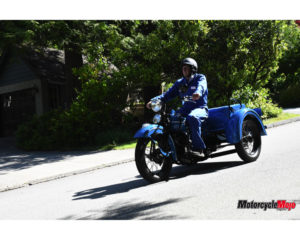 The Servi-Car was produced by Harley-Davidson from model year 1932 to 1973. It was a three-wheeled delivery machine with a chain-driven automobile-style differential in back and a large box mounted between the rear wheels, which could be used to carry parts, tools, fuel cans, packaged items or whatever was needed. With its 45 cubic inch engine, it was primarily marketed to large car dealers as an economical vehicle, and it could do the work of two men.
Previously, if a garage was to pick up a customer vehicle for service, it would take two service men: one to drive the garage vehicle back and forth, and one to drive the customer vehicle. But with the Servi-Car, now one man could ride out, hook the Servi-Car to the rear bumper of the customer vehicle, and then tow the trike back, using the customer vehicle. The large box allowed for easy and inexpensive handling of calls for breakdowns or drivers who ran out of fuel. Why drive…