After a three-year sabbatical, the KLR faithful rejoice at the introduction of a new model.

The Kawasaki KLR650 was introduced in 1987, yet that first generation, which enjoyed a 20-year run mostly unchanged, slipped under my radar. The reputable do-all bike wasn’t pretty, and it was quite simple even by mid-1980s standards. But it did create a following of diehard fans, one of which I became after having ridden the redesigned KLR650-E model in 2008. I eventually bought one.

That second-generation KLR looked much better to my eye, its frame-mounted fairing provided better wind protection and it had better suspension. However, its underpinnings, which included a single-cylinder lump of an engine, remained mostly unchanged. It enjoyed only half the lifespan of the first generation; increasingly stringent emissions standards finally caught up with its archaic carburetor, and to the chagrin of countless KLR converts — myself included — production ended in 2018.

While the KLR didn’t offer outstanding performance or advanced technical features, its reliability, overall usefulness and low price ($7,199 in 2018) made it a legendary bargain in motorcycling. Fortunately for grieving proponents of the venerable, affordable dual sport, Kawasaki reintroduced the KLR650 for 2022. 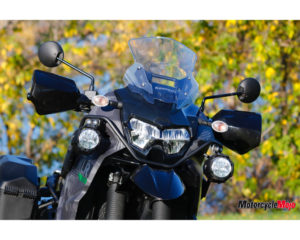 The folks at Kawasaki know a good thing shouldn’t be messed with, so while the KLR650 is new, it’s not all-new. There is a new variation, however: the KLR650 Adventure we test here, which adds hard side cases, LED auxiliary lights, a crash bar, a USB port and 12-volt outlet to the base model. Among the KLR’s most appealing features is a continued low price, the base model starting at just $7,499. Our KLR650 Adventure retails for $9,699. ABS is finally available and adding it to either the base KLR650 or the Adventure model adds just $300. Unfortunately, we cannot assess how the ABS performs off-road, since an ABS model was not available at the time of our test.

Despite being mostly unchanged, the new KLR has nonetheless received several improvements. What remains mostly unchanged is the 652 cc liquid-cooled single, though it does get a few internal reliability-enhancing improvements. These include replacing the ball clutch-release bearing with a thrust-needle bearing, installing a more resistant cam-chain guide, new shift fork and shift dogs for third gear, and a revised finish on fourth and fifth gears. The engine also gets new cam timing, and alternator output is increased to 26 amps from 17. As for the balancer-chain adjuster, unceremoniously known as the “doohickey,” it was poorly designed on earlier KLRs…