Every ride needs a plan, and this one involved as many water crossings as possible.

Benjamin Franklin summed it up: Three may keep a secret, he said, if two of them are dead. With confidentiality requested, normally my lips would be sealed, but not in this case. I’d flown to Vancouver from New Zealand and with my mate, Dave Jackson, I was on an adventure ride in British Columbia where we’d arrived at the Big Bar reaction ferry on the Fraser River. The vehicle ferry wasn’t sailing due to flooding, but there’s an aerial ferry there too — a small cage on a cable — and we’d hoped to ride across in that.

In the rain and fog, the 65 km clay and sand road in was just awful. My KLR650 was on Metzeler Tourance tires and I found it treacherous. We’d slithered our way to the remote crossing, where we found a fellow adventurer had arrived at the opposite bank by such an obscure route that he hadn’t seen the closed ferry signs.

A Bike in a Cage 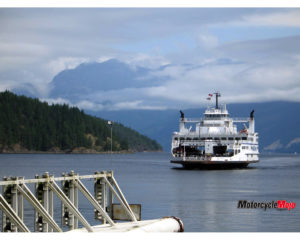 The ferry captain had taken pity on the rider and agreed to transport him and his KTM690 in the normally passenger-only cage. On arriving at our side of the river, the bike could not be wheeled from the platform, and the pair was in the process of using a block and tackle to lower it to the ground. With our assistance, the bike was soon safely rescued.

The reason we were there at all is simple: a lap record was to be established. Dave had been brought up in British Columbia, and he has a 2006 Kawasaki KLR650 stored near Vancouver. He had devised a plan to take in all the inland freshwater ferries that make up part of the road system. Canada’s west is very rugged, with towering, snow-topped, tree-covered mountains, deep valleys and mighty rivers. In their heyday, there were 140 ferries crossing the various lakes and rivers, but due to improvements with roads and the construction of bridges, only 14 remain.

Those 14 are toll-free and well-scattered, so Dave planned a route, including gravel and forestry roads, to link them up. When I heard of this adventure, I quickly invited myself to accompany him, and made enquiries to rent a bike in Vancouver.

The freshwater ferries are of three types: reaction ferries that are propelled by the river’s current and guided by a cable; cable ferries that winch themselves across; and free-running vessels. The scale of our undertaking became clear when we realized it would take us three days of riding and four salt-water ferries just…