This Triumph is built for the real-world road rider, with exceptional electronic suspension and the most powerful Triumph triple to date.

For the past 32 years, ever since John Bloor relaunched Britain’s legendary Triumph marque in 1990 with a range of three- and four-cylinder motorcycles that dared to target Japan Inc. head on, Triumph has done things differently. This included dropping its four-cylinder 1000/1200 cc models in 1998 because, despite being the first to feature twin balance shafts in their engines to counter vibration, Bloor determined that these bikes were “too Japanese.”

He wanted Triumph’s models to stand alone, hence the focus ever since on various triples of different capacities — and, since the return of the Bonneville in 2000, parallel-twins. The latest manifestation of that is the new-for-’22 Triumph Speed Triple 1200 RR, the British brand’s long-awaited first large-cube sportbike for a very long time, only done differently — no, very differently.

Of course, after Triumph made such a success out of going its own way with bikes that were unique in the marketplace, it was inevitable that these would end up being copied — for instance Yamaha’s range of MT-09 triples, MV Agusta’s 675/800 models, and Royal Enfield’s retro-style 650 parallel-twins.

A Clear Focus from the Start 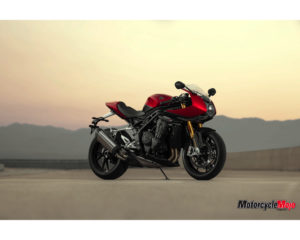 “We wanted to build on the basis of the Speed Triple 1200 RS we launched last year, which has been an immediate success with 3,900 examples purchased in just the first six months it’s been on sale,” says Wood. “So we’ve aimed at combining the engagement and agility plus the pinpoint handling of a 765 Street Triple with the performance and attitude of the latest generation Speed Triple 1200 RS, clothed in the styling of a traditional-type British café racer, expressed in a modern context. But above all it had to be enjoyable to ride on the road. We weren’t interested in producing a racer with lights. Instead, we’ve focused on delivering a fast, thrilling and very capable real world road bike!”

It has, indeed, been quite a while since Triumph last featured an outright sportbike in its range — not since the…