My name is Costa, and I have a motorcycle problem.

Ugh. My apologies to our regular readers, but here’s another column about another bike I recently acquired. Actually, it’s a pair of bikes. You know the drill by now: I keep saying I’ll avoid online classifieds, as I have a propensity to make impulsive bike purchases. But whenever I have some downtime, I find myself scrolling down pages and pages of motorcycles for sale. I honestly have no intention of buying, and do it mostly for the interesting and sometimes entertaining ads. But then one will pop up that’s so appealing I just can’t resist contacting the seller.

Even so, I’m still convinced I won’t be spending any money, because when an online deal seems too good to be true, it usually is. There are scammers out there to be wary of, and some people just gravely underestimate the value of their machine, and subsequently readjust the asking price after having received numerous inquiries about it in a short time. But, sometimes the deal is real, and I just can’t help myself — like when I saw a pair of 1975 Honda PC50s for sale. 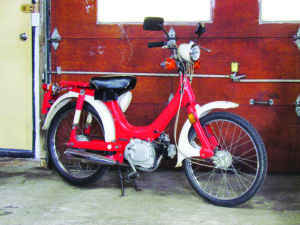 Okay, what is a PC50? Well, it’s just one step away from being a bicycle — it’s a moped. Honda produced the PC50K1 from 1970 to 1977. It’s unique by moped standards in that it has a four-stroke engine — most mopeds utilize a lighter, more cost-effective two-stroke. Honda made a series of these mopeds, starting in 1966 with the P50. The P50 was an unusual design, with its engine located to the left side of the rear wheel. That was followed by the PC50, which had an overhead-cam engine located mid-frame, in 1969. My PC50K1 superseded the PC50, and featured a pushrod-operated overhead valve engine.

The engine is as simple as an engine can be. It has a single chain-driven camshaft (to date, it is the only engine I’ve ever seen in which the cam is made entirely of aluminum), two valves, a fixed, point ignition system, a 6-volt lighting coil, and a single-speed transmission that uses a centrifugal clutch to get going. A lever on the right crankcase disengages the engine so you can pedal the PC like a bicycle, and engages the engine so you can use the pedals to start it up and ride away. The engine produces 1.8 horsepower, and 2.1 ft-lb of torque — a car’s wiper motor probably produces more power. With a full three-litre fuel tank and 0.75 litres of oil in the crankcase, it weighs 50 kg.

The ad I came across described a pair of PC50s for sale for just $400. One was assembled and mostly complete, the other was in boxes and supposedly almost as complete. Seriously, how can one resist such an offer? I subsequently looked at ads for the same model across the country, and although rare, the ones advertised boasted prices between $1,000 and $2,000. I was at the seller’s home within two days of seeing the ad. 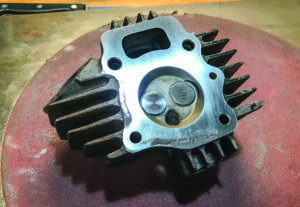 Once I got them home, I quickly determined that I could almost put together one good PC using parts from both and that the nicer one was the one in boxes. The missing parts included a headlight assembly, a right side cover, and the airbox. None of these parts were critical to getting it running, but they did prove hard to find — and ridiculously expensive. A used headlight assembly, including the glass, metal retaining ring and adjusting screw, but not the headlight housing, ranged in price from CDN$150 to £250! Fortunately, I found a Canadian supplier of vintage Honda mini bike parts (phatmx.com) that had a reproduction for $64, shipping included. The hardest things to find were the skinny 19-inch tires, though a moped shop in California had a pair for just under CDN$100, shipped. The airbox parts proved too difficult to source affordably, so I just made my own using automotive heater hose and a universal oiled air filter, costing a total of $22.

I decided to refresh and use the assembled engine, and to refresh and reassemble the engine in boxes as a spare. The valves were not seating properly, so I refreshed them on my valve refacing machine. The cylinder was nice (the speedo shows 5,500 miles), so I just honed it and reused the piston rings. The carburetor got overhauled, and the ignition points cleaned and set. Once it was all together, it fired up with about three turns of the pedals.

I do intend to ride it this summer, so I also made it safer by installing turn signals and a brake light, since these were apparently not mandatory for mopeds in 1975. I also promise to stay away from classifi… ah, screw it. I’ll let you know the next time I make another impulsive purchase.