Meeting up with wildlife on the road might scare some people, but not everyone.

I want to see Yellowstone: this has been my dream since I was a child,” I said during the bucket lists discussion with a couple of our motorcycling friends. “You don’t want to do it on a motorcycle,” said Pat, my friend and long-time motorcycle enthusiast, confidently. “Animals are on the roads, cars stop unexpectedly to see them, and the speed limit is 45 mph, so you won’t get anywhere fast.”

We all know about the dangers of wildlife and motorcycle safety from YouTube videos of deer appearing out of nowhere and jumping on unsuspected riders, stories told and retold about a friend of a friend of a friend surviving a horrific crash after cutting a deer in half, and road signs informing motorists of how many days have passed without a deer kill.

Those of us who venture outside of the urban sprawl quickly learn the safety basics regarding animals, such as avoiding riding at dawn or dusk when the risk of animals on our roads is the highest, watching for slight movements in the brush, and being prepared for blind corners where the pesky beasts lie in wait to ambush us.

Everyone Needs a Plan 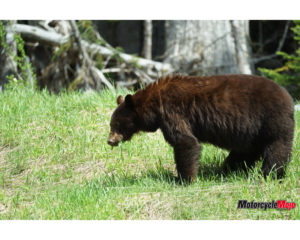 My personal best strategy had always been having my husband, Robert, take the lead, with me riding second. This tactic allows me to watch his brake lights, and I trust his peripheral vision more than mine. The theory behind it is that men, being hunters, detect slight movements better than women, who are gatherers. This is how I justify my strategy. Robert accepts the lead thinking that he is in charge, which works very well for my clever plan.

Nonetheless, after experiencing a few benign sightings of deer on a few local B.C. and Washington roads, as well as a herd of bighorn sheep blocking the road on our trip to the Alberta Rockies, I had been terrified of an unexpected meetup with a furry creature of a substantial size, which could potentially send me straight to a hospital bed — and that’s the best-case scenario. As a matter of fact, I wished that the wildlife would simply disappear for good in places where I wanted to ride — quite a self-serving wish, you might say, and you’d be right. But all this was before our first motorcycle trip to Yellowstone National Park, which happened just a few months after that memorable conversation with my friend Pat.

Driving to Yellowstone was simply not an option, as the idea of being confined in a box with windows to look through for two weeks was seriously unappealing. Riding, on…