No need to fear a language barrier in this triangle-shaped piece of colourful paradise.

I’m not proud of this: My sixth-grade classmates and I thought we had really accomplished something when our new French teacher fled the room in tears. “Why,” I’d say with a sneer, “would I ever need to learn French?” So the irony was not lost on me when, as a university graduate, I landed my first teaching job: Beginner French. It was precisely that linguistic animosity that Hugh MacLennan described when he coined the title of his 1945 Canadian classic Two Solitudes. Both French and English citizens have struggled with the barriers of language and culture. I know many travellers who have avoided Quebec for fear of an inability to communicate. And that is unfortunate.

For my part, it wasn’t an aversion. It was just that there were so many places in the world to see — places far from my Ontario home. So when Covid-19 shuttered our borders with the United States and I began taking a second look at our own country, I realized that, like residents of Niagara who have never seen the Falls, I had ignored La Belle Province long enough.

A Ride to a Neighbouring Province 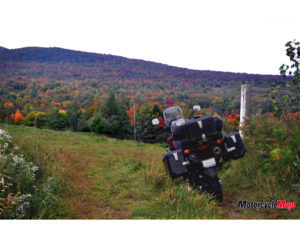 A last-minute decision had me heading for the Eastern Townships, the scalene triangle-shaped part of the province that is southeast of Montreal. Here, the Appalachian Mountains spill over the Vermont border as far north as the St. Lawrence River and east all the way into the Gaspé Peninsula. It was early October, and the mountains were afire with colours of autumn I had never seen: green had almost completely surrendered to yellow and red, yes, but with the mix of vibrant orange and various shades of red from deep mauve to pastel pink, the blaze was spectacular.

I rolled into the idyllic mountain village of Sutton just as the evening sun itself was turning a deep red and touching the surrounding peaks. The 3,906 permanent residents live just 12 km from the U.S. border, and only 66 km from Smugglers Notch, an infamous mountain pass permitting illegal trade between the two countries. From cattle and goods to fugitive slaves and alcohol, the Notch has witnessed much traffic to Canada over the last 200 years. The village, which now relies on tourism for its survival, was bidding farewell to a slow summer season and was eagerly anticipating the arrival of skiers. It was, after all, the fall of 2020, and the pandemic was crushing the economy.

Indeed, I had waited until the last moment and almost called off my trip because of it. I felt responsible to my family to keep myself — and by extension, them — safe. The fact was, however, that my travel habits make me quite self-sufficient, carrying several days’ worth of food and wild camping wherever possible. So with reasonable vigilance, including masks and hand sanitizer, I would not be in…