It’s not surprising the travels you can find with a new moto passion and a highly detailed map.

Vancouver Island is a Mecca for dual-purpose riding adventures. I know that because my sister Summer and her boyfriend, Kevin, have become somewhat experts on the subject. Having only been riding for a few short years, they have logged upwards of 10,000 km on their matching Yamaha XT250s. They have also seen stunning, rugged scenery, spectacular giant trees, unique plane wrecks, lonely rural towns, and pristine twisty paved roads. They are known on local social media as “The XT Twins”.

Despite my extensive career in riding, the two of them introduced me to my first-ever dual-purpose ride, and have also taken me on a few exceptionally beautiful rides. It’s such a treat to show up at their place, hop on a motorcycle, and in five minutes be led up some fun logging roads to breathtaking viewpoints where the vast wilderness of the Canadian West Coast becomes evident. There is nothing quite like standing at the edge of a lonely viewpoint on the precipice of a mountain you’ve just summited on a motorcycle, looking at endless greenery, trees, rolling hills and snow-capped mountains.

To say that they are obsessed with riding is an understatement. My sister giggles and grins uncontrollably when she sits on one of the five motorcycles they’ve amassed in their collection in a short period of time. “Motorcycle riding is so fun!” she practically yells at me. I roll my eyes because, well, I’ve known that for more than 20 years. “You finally got with the program!” I practically shout back over the roar of the revving engine.

And their method for adventuring and discovering new roads and places to explore is pretty unique. 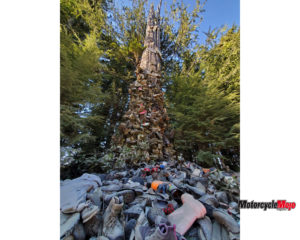 They started by picking up the famous Backroad Mapbook, which most riders are likely familiar with. They stuff it in their tank bag, take it wherever and whenever they ride, and reference it when looking for interesting new places to explore. For them, it’s an essential part of their riding equipment.

One day, while studying the different pages of the map book, Summer commented, “Wouldn’t it be neat if we had a giant, wall-sized map of the entire island, so we could see everything at once?” Kevin filed that idea securely in his head and later secretly went to work to ensure that it came to fruition.

He contacted Chris at Backroad Mapbooks to place a custom order. Soon, he was holding a rolled-up 2.4 x 1.5 metre map of Vancouver Island — including Metro Vancouver and the surrounding area — as a Christmas…