The Harley-Davidson Sportster, introduced in 1957, boasts the second-longest uninterrupted production run in motorcycling history. Only the Royal Enfield Bullet is older, 25 years the Sportster’s senior. However, the American-made icon has one big advantage over the now-Indian-made classic: it has seen considerable evolution over its decades-long production run. And by far, the Sportster’s most radical change came with the introduction of the Revolution
Max platform, which we first saw on the Sportster S model. To give you an example of how radical the changes are, the only part the 2022 Nightster tested here shares with the air-cooled Sportster is the license-plate bracket.

A few things that all Sportsters have shared in the past were a full-cradle frame, a 45-degree air-cooled V-twin, and pushrods. These are all gone on the Revolution Max platform. The chassis now uses a steel-trellis forward unit, a steel midsection that is attached to the rear of the engine, which incorporates the swingarm pivot, and a subframe that has shock and fender mounts. The engine is now an integral part of the chassis, and is used as a stressed member — gone are the twin downtubes visible on all Sportys of yore. Frame geometry is relaxed, more-so than on the current Harley model that the Nightster closest resembles, the Iron 883. Rake angle is the same at 30 degrees, though trail is up by 20 mm to 137 mm. Wheelbase is 40 mm longer, now at 1,556 mm. This gives the bike a substantial footprint, and it looks appropriately muscular. 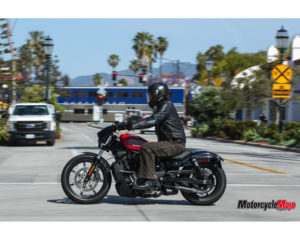 The steering geometry would normally make the new bike feel more ponderous on the road, but there’s one area in which the Nightster has an advantage over most motorcycles, let alone cruisers: it has a very low centre of gravity. A few things contribute to lowering the C of G, the most critical factor being the location of the fuel tank. It is now hidden, placed low, just ahead of the rear wheel and behind the engine, with the filler cap under the flip-up seat. This limits its size to 11.7 litres, down from 12.5 on the previous Sportster. This location forced the battery to be relocated to the front of the engine, below the radiator, which also helps move weight down low. The low centre of gravity combines with drastically reduced weight to make the Nightster one of the easiest large-displacement cruisers to lift off the side stand in recent memory. Claimed wet weight is 218 kg, which undercuts the Iron 883 by 38 kg, and also makes it the lightest production Sportster ever. Add a low 705 mm seat height and slender midsection, and this bike should be a favourite among beginners, as it inspires confidence before even touching the start button. But don’t write off the Nightster as a beginner bike, because there’s so much to this machine that will appeal to even seasoned riders…