To the uneducated this bike might look stock, but that couldn’t be further from the truth.

Saying “that bike looks stock” to someone who just put time and energy into piecing together a custom motorcycle might offend a builder.

Not Dennis Firth. “I see that as a compliment,” the Calgary-based creator says in regard to his one-off street and trail inspired 1973 Honda CL350. “This bike is far from stock, but as I got rolling with it, my goal was to make it look like it came from the factory this way.”

Firth has been riding since he was 14. He bought a 1964 Honda Super Cub in 1969, when it was legal to ride a 100 cc (or smaller) machine in Alberta on a learner’s permit. Living in Red Deer at the time, for two years the little step-through took him to school and on many other adventures. At 16, he began driving a Ford Galaxie, but returned to motorcycles in 1973 when he picked up a 1969 Honda CL160 from Bow Cycle in Calgary. This Honda took Firth from Calgary to Edmonton to attend university, and he rode it in all kinds of weather as it was easy to find a place to park it while on campus.

Looking for that Elusive Scrambler 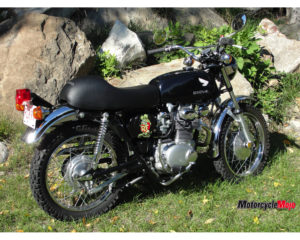 Other Hondas followed, including a ’79 CX500, an ’83 GL1100 and his first and only brand new motorcycle, an ’04 GL1800. Thousands of kilometres were added to the Gold Wing, touring two-up with his wife. But all the while, Firth was searching for a CL160 scrambler, like the one he’d earlier enjoyed.

“In 2004, instead of a CL160, I found a 1973 CL350 through a member of the local Canadian Vintage Motorcycle Group,” Firth explains. “I bought that bike, and although it was clean, it had issues with the exhaust pipes and a couple of other problems.”

While searching the old print edition of the Bargain Finder classifieds, Firth found another ’73 CL350 with a good exhaust and muffler system. He bought this bike for $500, and stripped both CLs down, using the best parts of the two to build one completely stock Honda. Shortly after completing the job, Firth sold the CL350 and many of the leftover parts but kept the frame and engine of the Bargain Finder machine.

“My idea was that I would build some sort of a café racer using that CL350 platform,” he explains. “I held onto the frame and engine, and acquired some Yamaha RD350LC pieces including mag wheels and a set of RZ350 forks, thinking I might graft them onto the CL.”

Sidetracked by Other Projects

In the interim, Firth helped a friend…