A west coast riding club hits a milestone and continues to thrive.

Milestones deserve attention and the Greater Vancouver Motorcycle Club celebrates a significant anniversary in 2022 with 100 years of history. Since inception, the GVMC has continuously promoted power two-wheeled sport, both on-road and off-road. As crucial as motorcycles are to the group, it’s always been a social club – perhaps even moreso.

Proving that: “My dad met my mom at one of the GV’s dances late in 1948,” says long-time member Chris Carey.

And it all started when pioneer Vancouver motorcyclist Fred Deeley began importing BSAs in 1916, followed by Harley-Davidsons in 1917. After a short time selling motorcycles and forming bonds with like-minded enthusiasts, Deeley and a small group of friends often ventured out on their machines for weekend picnic rides. 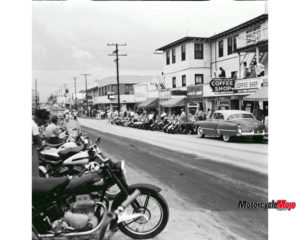 The roads they traversed were mostly gravel, and according to a GVMC history book called Anatomy of a Club written by Carey’s father, Bob, who joined the club in 1948, these routes would have most likely taken the motorcyclists up the Fraser Valley. Word about these excursions spread among other Vancouver riding enthusiasts, and in 1922, Deeley established the Lions Gate Motorcycle Club. Meetings were held above the Fred Deeley Cars & Motorcycles dealership, then located at 901 West Broadway. Membership grew through the 1920s, but they weren’t the only active club and in 1931 the Lions Gate group joined the High Hatters Motorcycle Club to become the Vancouver Motorcycle Club. The group’s colours were officially changed from maroon and green to black and orange and not long after, the word Greater was added to the name.

In his book, Bob notes the 1930s were a busy time for the group, as it sponsored several race events and set up a ride known as the 300 Miler — something that became an annual tradition and was later renamed the Caribou Trails Run. In 2021, the GVMC ran the 91st edition of the ride in a modified format. Traditionally an overnight timed endurance ride of more than 500 km, due to pandemic restrictions and B.C. forest fires, the 2021 ride was simply a poker run. During its peak, the Caribou Trails Run saw as many as 1,000 riders participate.

Around 1931, with an active group of riders just over the border in Bellingham, Wash., Fred Deeley worked with that city’s Harley-Davidson dealer, Pop Place, to organize the Pacific North West Motorcycle Association. This was, and still is, an umbrella organization that ensures races, rides and other events don’t encounter scheduling conflicts so enthusiasts from the area can plan accordingly.

The Clubhouse, Royalty and the War

Significantly, in 1937, the GVMC had enough money in its treasury to purchase a piece of industrial land for $50 on Melbourne Street where a clubhouse was constructed. “Several of the members were…