The leadup to a hectic MotoGP race weekend.

Thursday mornings at MotoGP events are hectic. Forklifts buzz about, taking pallets of spare parts and crates of unobtainable machines from tents and cargo containers to their home for the weekend: the pit box.

Race teams have this down to a science by now, especially this late in the season. They methodically unpack, stack and assemble a professional and familiar environment for their riders the way most of us select what we are going to wear in the morning.

Meanwhile, the fearless pilots of these machines are bombarded by journalists looking for interviews and photo ops while they try to get settled into their temporary weekend digs.

As one of those journalists, MotoGP Thursday mornings are my favourite part of the “weekend.” You get to talk to riders before they are in race mode; before they are the aliens circling the track at speeds nobody with human blood in their veins could ever obtain. 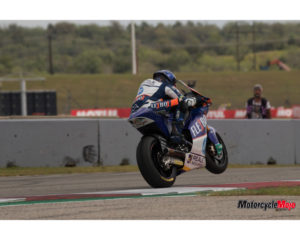 In non-pandemic years, the paddock is full of fans huddled around their favourite rider’s garage, waiting for a glimpse. Even on a Thursday, it has been a struggle for me to get the interviews and photos I need to complete my journalistic assignments before the human riders donned their leathers. Historically, once they become laser-focused, track-circling aliens, they have a tendency to grant fewer interviews, so time is usually precious.

While the lack of a crowded paddock felt awkward to me, it did make things a bit easier as a journalist. Instead of having to wade through a sea of fans to get from garage to garage, I was free to slow my pace and take in my surroundings as a fan as I transitioned from interview to interview.

It wasn’t just me that seemed to be relaxed. Fan favourites such as Jack Miller and Valentino Rossi were spotted having conversations with their crew, fellow racers, and families out in the open, knowing that they, too, could take their time moving about while their machines were being prepared for the controlled chaos of a MotoGP race.

I was in Austin to talk with Moto2 racers Remy Gardner, Marcel Schrotter, and Hector Garzo, all of whom happen to share a sponsor with me, a lowly American club racer. That sponsor is VNM Sport, an American baselayer company run by a Canadian, that continues to thrive in a very niche market despite an ongoing global pandemic.

Aliki Karayan is the Canadian behind VNM, and she has been making motorcycle baselayers that can be found in paddocks around the world. She got her start with club racers and track day enthusiasts in…