Throughout motorized history, the pursuit of high speed is a dangerous game.

The image came up on one of a handful of vintage bike pages I follow on social media. It was accompanied by a somewhat inaccurate description of the gentlemen pictured, but there was enough info in the comment to do a little digging — and with my interest piqued, I dug. I eventually tracked down a remarkably high-resolution image, as well as a few others from the same photo session, on an online image database. Everything about the image fascinates me: The man steering the tandem motorcycle is identified only as O’Weiss; the man at the rear is Jean Bertin. Bertin was the personal pacer of French cyclist Paul Guignard. Guignard’s speciality was motor-paced cycling.

In the early 20th century, motor-paced cycling was a very dangerous but lucrative profession for those who were brave enough to compete. Cyclists, also known as stayers (because they had to stay close to the pace bike), would ride behind the pace motorcycle to set speed records over long distances. Races ranged in length from one hour to six days, though a popular race was the 60-minute race since the speeds were high. Faster stayers often covered more than 60 miles during these races.

The motorcycle in the picture is a pacing motorcycle, used to provide a slipstream for the cyclist, thus allowing him to maintain high speeds for a long time. Since the pace motorcycles themselves were not competing, there were few regulations in place regarding how they were built; some were tandems like the one pictured, most were solo machines. The majority were cobbled together by the pace rider using parts scavenged from other motorcycles.

The bicycles had small front wheels in order to ride as close as possible to the pace bike, and the pace bike was often equipped with a small roller just aft of the rear wheel to avoid disaster should the cyclist make contact with the pace bike. Despite this safety feature, many pacers and cyclists got killed in crashes due to the high speeds and lack of protection. And crashes were common, since the bicycle and motorcycle tires of the time would often blow, as they were not capable of withstanding high speeds for a long time. One crash in Berlin in 1909 killed nine people after a pace motorcycle landed in the grandstands.

Early pace bikes were terrifying contraptions, with engines sometimes displacing more than 2,000 cc. They had a direct drive with no transmission or clutch, no brakes, and no exhaust, causing flames and sparks to fly onto the rider’s legs. And they most likely vibrated terribly. The rider was seated above and behind the rear wheel, with the handlebar stretching far enough rearward so that he could sit bolt upright, thus providing the most effective slipstream.

The image in question, taken by the long-defunct French photography firm, Agence Pol, was a publicity shot taken in 1906. A close inspection of the bike in the picture reveals many things about its mechanicals. Despite being handmade, the frame is very well-built, with well-formed tubes and brazed junctions. Unfortunately, the manufacturer of the engine is unknown, as the maker’s name is obstructed by a piece of cloth cradling the bottom of the engine — only “RT & Cie” is visible. The cloth, as well as a curved sheet of metal behind the cylinder, were placed there to catch engine oil.

The engine spewed oil due to its total-loss oiling system, which was fed by a hand pump on an oil tank located atop the large gas tank, just ahead of the second pace rider. The gas tank was a long, rectangular reservoir that contained enough fuel to go the race distance. At the front-left of the rear handlebar was the throttle control, which operated a cam that regulated the fuel mixture at the intake port on the cylinder head. 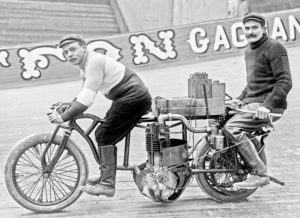 The carburetor was a simple affair that contained no throttle valve and was always fully open. The total-loss electrical system included a battery that sat just ahead of the oil tank, and a very simple contact-point ignition system crudely wired to the battery. The long lever on the left of the rear handlebar was for the spark advance.

A wide leather belt provided the final drive, and the rear wheel was a work of art that probably took a couple of days to lace up: it had a belt pulley laced onto either side of the hub. It appears in the images that the left pulley is of a slightly smaller diameter, offering the option of taller gearing and higher speeds.

Despite the danger, high-speed motor-paced cycling on banked wooden tracks continued until sometime in the 1980s. While there are still some forms of motor-paced racing around today, what remains of its heyday can be found only in pictures. And there’s no doubt that they are fascinating.