Heatwaves and wildfires force a change of plans and different routes.

In 2020, we changed the plans for a bike trip due to Covid-19 and stayed within our own province of Alberta. In 2021, with governments reducing restrictions and allowing travel again, we opted to ride through British Columbia. We delayed our departure time to ensure interprovincial travel was allowed, which was fortuitous as we missed the record heat wave in B.C., but the resulting forest fires meant smoke was going to be our constant companion. 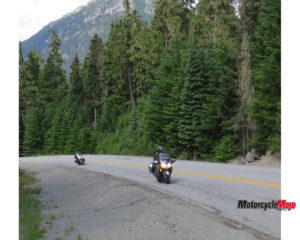 Four of us — Dave Hickman, John Ritz, Keith Tully and myself — left Calgary on a Friday morning to spend our first night in Revelstoke. To make it a bit more interesting, we took the old Highway 1A from Cochrane to Canmore, which passes through the Stoney Nakoda Nation near Morley, Alta. On the reserve, the road is a two-lane highway with narrow shoulders that feed you a steady diet of curves for about 35 km.

Using the major highways, it’s a little over 400 km to Revelstoke, which did not seem far enough for the first day. We opted to use part of the Golden Triangle by heading south at Castle Junction to Radium on Hwy 93 and then back up to Golden on Hwy 95 before heading to Revelstoke. This brought the distance up to about 550 km. Hwy 93 is rated the 22nd (DH22) best motorcycle highway according to Destination Highways British Columbia.

Normally, Hwy 93 is a very scenic road that runs along Kootenay River, with nice views of the mountains across the valley. This year, the air was filled with smoke leaving the surrounding mountains as a blurred image in the haze. It was still a nice section to ride, but it was missing the scenic views we normally have. The first and last 10 km are where the unwary can donate some funds to the speed tax collectors.

By contrast, the ride from Radium to Golden is through an open valley dotted with small farms. Any grass area not irrigated was dry and gold in colour. The smoke level was much lower riding up Hwy 95 than it was…