This family of luxury touring bikes is setting a higher bar.

Fresh from producing 194,261 bikes in 2021 — making that its best year ever since it was founded 99 years ago, in 1923 — BMW Motorrad is on a product-driven roll that’s taken Europe’s largest manufacturer of premium motorcycles back to pre-Covid sales levels, and then some.

However, that production number was achieved despite the German manufacturer having thusfar failed to upgrade the transverse in-line, 24-valve six-cylinder engine powering its range-topping line-up of K1600 land yachts and mega-baggers to make it Euro 5 compliant in time for the new sound and emissions regulations, which were introduced in January 2021. That being the case, it was widely presumed the end had finally come for this über-premium model line-up, which has been on offer for the past decade.

However, with a total of 68,843 examples of BMW’s entire high-priced six-cylinder range built and sold around the world since it first reached dealers’ showrooms in March 2011, this is an important line for BMW.

Encouraged by these sales numbers, BMW has confounded the skeptics and completely revamped its now-emissions-friendly K1600 range for 2022. While the line-up is unaltered, with the K1600 GT, K1600 GTL, K1600 B and K1600 Grand America still all on offer, they’ve each been improved for this year, and the chance to ride them all on a 230 km day in the hilly Spanish hinterland behind Malaga and the Costa del Sol underlined what a distinct riding character these sweet sixes bring to the touring party. 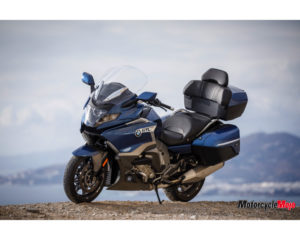 In updating this quartet of mile-eating monster-bikes, BMW has retained all the mechanical allure and functional excellence provided by their predecessors, thanks to the most soulful-sounding — as well as the most compact — in-line six-cylinder engine yet made for motorcycle use, at just
555 mm in width (so only slightly more than most in-line fours).

The song that issues from the six exit holes in the BMW’s twin stainless steel exhausts is melodic and musical, with a subtly different sound for each variant, which BMW engineers admit to having deliberately engineered: the more sporty-sounding GT’s exhaust note resembles a sotto voce version of the wondrous wail produced by BMW’s trademark six-cylinder sedan car racers, while a subdued snarl is issued from the quieter GTL’s pipes when you wind it on hard.

In meeting the stringent new Euro 5 regulations, BMW Motorrad engineers have also achieved a minor miracle by actually increasing peak torque on the K1600 engine with the same identical spec common to all four variants by four ft-lb to 133 ft-lb at the same 5,250 rpm mark as before, while delivering exactly the same peak power of 160 hp but…