What was once an old rusty 1929 Raleigh Model 15 de Luxe, this motorcycle was treated to a sympathetic restoration and now shines like gold.

As found, the 250 cc British motorcycle was in original condition and it represented a unique challenge that intrigued Calgary’s Roger Brown. Seemingly in a perpetual state of motion, restorer Brown has brought a remarkable number of interesting old machines back from the brink, and one of those was a 1947 Triumph 3T. This 350 cc Triumph figures into how the Raleigh was obtained. 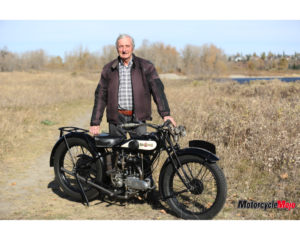 “In 2018, I was looking around for my next project,” Brown explains. “There were two requirements: it had to be old, and it had to be British. I was talking to people at the Red Deer vintage motorcycle swap meet, and through the grapevine, I found out Steve Williams had two older British bikes for sale.”

Williams had an OK Supreme 250 Flying Cloud, and the Raleigh. Photographs of each were sent to Brown, and it was the Raleigh that piqued his interest. “The OK Supreme had coil ignition and pressed steel forks — and that didn’t excite me,” Brown says. “But the Raleigh did.”

After a couple of discussions, the idea of trading his finished Triumph 3T for the Raleigh plus some cash from Williams was presented. Williams accepted the swap. “I like to keep working on stuff, and I can’t hold on to everything forever,” Brown says about letting go of his ’47 Triumph 3T. “This worked out great. I could move something along and get something else to work on.”

With the swap completed and the 1929 Raleigh in his suburban Calgary workshop, Brown spent almost two years looking the machine over, and once a month he’d spray penetrating oil on everything that needed to move. Not much of the Raleigh’s origin story is known, apart from the fact the bike was laid up in 1946 by the widow of the original owner. “It would have been interesting to know how it found its way to Alberta, because motorcycles of this age are hard to find here,” Brown says. The machine changed hands in the 1980s and was stored away again until Williams acquired it in 2016.

Brown says surface rust covered much of the Raleigh, but there was no extreme corrosion on any of the parts. The motor was not seized, the forks worked (sort of), the wheels turned, brakes were operational, and the magneto turned and showed signs of a very weak spark. While…