After the sold-out showroom success of its all-new 2021 Trident 660 naked Roadster which, since its debut last March, has found more than 15,500 customers in its first 10 months of production, Triumph has unveiled a second three-cylinder variation on that entry-level theme, as it seeks to expand its formidable new presence in the ever-more-crowded and increasingly crucial 600-800 cc middleweight marketplace.

This time around, the 2022 Tiger Sport 660 is targeted at the Adventure Sports segment, where it confronts a trio of well-established models that are big earners for their Japanese manufacturers. But once again, just as with the Trident, the British company is seeking to bring added value to its offering via a series of features absent from its main competitors, the Kawasaki Versys 650 and Suzuki V-Strom 650. That’s while offering the Thai-built triple — all its rivals are less powerful twins — at a very competitive price of $10,995 for the Lucerne Blue and Black or Graphite and Black variants, with the Korosi Red and Graphite option costing $125 more.

This is keen pricing given its category-leading specification, which includes a two-year unlimited mileage warranty plus 16,000 km service intervals aimed at offering the lowest cost of ownership in the category. That’s made feasible, says Triumph product boss Steve Sargent, who’s been responsible for supervising this model’s creation, thanks to the extensive testing program which underpins this latest example of the firm’s trademark engine platform.

Testing and the Low Cost of Ownership 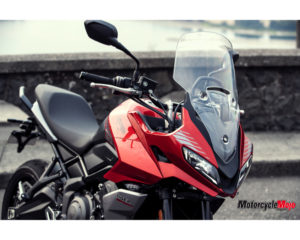 During its development, the 660 engine underwent over 1.6 million km worth of durability testing, 1,900 km of flat-out speed runs, 31 individual rig tests over 3,440 hours, 32,000 km on track and 3,300 hours of road testing. As of the end of 2021, the British company has produced and sold over 650,000 three-cylinder motorcycles since John Bloor restarted Triumph production three decades ago in 1991, so it knows a bit about how to build such bikes — and build them to last.
During the first three years of ownership, the new Tiger Sport 660 is claimed to require the shortest time for service work in its category, and the lowest cost of routine maintenance parts. So over a three-year timeframe, instead of the 11.0 to 15.9 standard workshop hours needed by the competition, the Tiger Sport only requires 8.3 hours of service time, making it at least 30 per cent less pricey than its…