Growing up in a railroad family, this writer has a desire to discover some of B.C.’s railroad history.

My father and grandfather both worked for the Canadian Pacific Railway, so my childhood was pretty much spent around old railway sidings, and the smell of creosote ties lingers strong in my memories. I even took a run at working for the CPR decades ago, loading up my 1981 Honda CM400T to attend brakeman training in Revelstoke, B.C.

Motorcycling stuck, but being a brakeman was short-lived.

I did, however, retain a fascination with the romanticism of the bygone era of rail travel, when steeped-walled valleys echoed the sound of bellowing steam engines. I have continued to pursue that passion by travelling — on my much newer Honda — many of the former railway routes now converted to what are called “rail trails.” Typically, my goal on the rail trails is not to skip over any of the sections, staying true to the original grade and not bailing out on secondary roads that often run parallel to such routes. 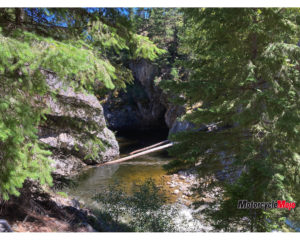 Riding the rail trails is not highly technical, but the topography offers enough thrills and excitement to keep you alert and standing on the pegs often, and, of course, keeping a watchful eye out for historic remnants from a time when life and society moved a bit slower, and distances seemed vast in comparison to today’s standards.

My ride of choice for this terrain is my Honda CRF250RL (Rally). I must admit the other bike in my stable, the much more tarmac-orientated Suzuki V-Strom 650 is a beast of a bike compared to the Rally, but it has the Suzuki beat in many departments with much higher ground clearance, a whopping 68 kg lighter, and that 21-inch wheel in the front tracks so much better in loose, sloppy, and rock-strewn surfaces — terrain characteristics that are very prevalent on the rail trail system.

My much more off-road accomplished riding mate, Jon, is astride a 2009 BMW F800GS and he handles its extra weight with ease, but for my aging infrastructure, the lighter and nimbler, the better.

After opening my garage door, it’s not very far, geographically speaking, to get to where I can venture on to the system that makes up the Kettle Valley Rail Trail. In fact, Penticton was once an important hub in the various “subdivisions” that comprised the 562 km of the former Kettle Valley Railway, and its iconic CPR railway station, built in 1941, still stands.

Laying Tracks to the East

Andrew McCulloch, chief engineer of the Kettle Valley Railway, was something of a legend. His ability…