Years of experience come into play when planning several weeks on the road.

By the time you read this, I will be several weeks gone, lured by the call of the wild. Finally. Over the past decade and a half, I have slowly and methodically been adding checkmarks to my bucket list of Canadian provinces and U.S. states, so far claiming the Lower 48 and all 10 provinces. The only political geography that remained was Hawaii, Alaska, and the three Canadian territories. Nunavut and Hawaii continued unexplored because I have yet to find the roads that lead there.

The Northwest Territories, Yukon, and Alaska, however, are simply a long way from Niagara, and with other pursuits and busyness, lately I had begun to wonder if I would ever see them. But the celebration of my birthday — the last in my sixth decade — became a subtle, steady nudge. Then one day I noticed the message on the back of an old Motorcycle Mojo t-shirt: “So many roads, so little time”. That evening I began to thumb through the pages of The Milepost, Alaska’s detailed annual travel guide. The pivotal elbow to the ribs came when Mojo arranged for the long-term test ride of a 2022 Suzuki V-Strom 650. The clarity was sudden: If the universe had a plan, who was I to argue? 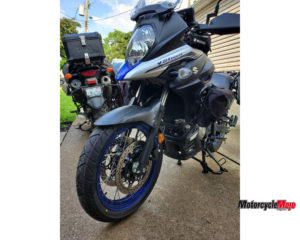 I began checking my gear, itemizing lists, and researching any specifics I might need in grizzly country. I knew about the importance of good camp hygiene: cooking away from your tent site, and hanging your food in a tree at some distance — three metres above the ground and two metres from the trunk. My concern was what to do in the north, where trees might not grow more than a metre tall.

I soon found an efficiently sized bear-proof food container by BearVault and discovered a compact electric fence kit designed for backpackers by Bearwatch Systems. It might be overkill, but if any killing was to be done, I’d rather it was now and not in the dead of night on the banks of an Alaskan river.

A few who know me might say I have tiny issues with overpreparing. A case in point: when we took the kids to Disney years ago, my plan looked like the LA Rams’ playbook for the Super Bowl. (But hey, the Rams won, and, as I still tell the kids, we never stood in line more than five minutes for a single attraction.) I like to think that I have relaxed somewhat over the years, but you be the judge. The following is a glimpse at what I have learned about planning a long-distance motorcycle adventure.

Typically, I begin by Googling “things to see in Manitoba” (for example) and pinning those to a map in Garmin Basecamp. Then I go to Atlas Obscura…