A full-on touring bike that handles like a sportbike.

More than for most other bike companies, the timing of the Covid-19 pandemic was particularly cruel for Indian. America’s oldest existing motorcycle manufacturer not only had to jettison plans to celebrate the 2020 centenary of its historic Scout model’s birth via a series of global parties, leaving it to consequently pass almost unnoticed, but the debut that same year of its new generation PowerPlus 108 engine in the all-new Challenger bagger was also inevitably less widely touted. The resulting bike didn’t exactly slink in under the wire, but certainly didn’t get the global marketplace exposure it deserved.
Now the Polaris-owned brand is making up for lost time with the debut of the Pursuit, a full-dress tourer that’s essentially the Challenger with a capacious top box and various other items, including additional lower fairing panels, a taller windscreen and electronically adjustable rear suspension preload.

The chance to spend a day riding the top-end Limited version complete with the same snout-nosed fairing as the Challenger with its trademark solo headlight, squared-off locking saddlebags and an illuminated Indian head-dress up front, on switchback roads winding through the somewhat improbable terrain of the French Alps around Chamonix on the European press launch, revealed this to be a dresser not like the others.

A Sportbike in Touring Clothing 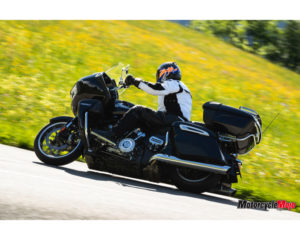 Improbable, because while perfectly adept at US-style highway cruising, as demonstrated on a brief visit to the Mont Blanc Autoroute heading south to Italy beneath Europe’s tallest mountain, Indian management is so proud of the handling qualities of the Pursuit’s super-stiff Challenger-derived hydroformed aluminum backbone chassis that they sent us off on a 222 km day of riding along roads that a Superbike rider would have felt at home on and challenged by.

That confidence in their engineers’ skills at producing an American-style two-wheeled Supertourer which handles like a sportbike has paid off richly. The Pursuit’s poise and appetite for the twisties not only surpasses most of its rivals, but also by some way the overall performance of the company’s first generation tourer, the Chief, which launched the Indian brand down the comeback trail on its debut late in 2013, less than two short years after Polaris had acquired the defunct but historic brand.

On debut, the Chief and its heavyweight bagger and tourer brethren were powered by Indian’s air-cooled Thunder Stroke 111 ci engine — an air-cooled, long stroke OHV 49-degree V-twin measuring 101 x 113 mm for a capacity of 1,811 cc in metric money. This was later supplanted by the…