Stunning seascapes, twisty roads and pretty villages are a constant around the Gaspé Peninsula.

The curtain closes after the final bow. All I can think is “I wish it wasn’t over.” That’s how I feel every time I ride home from Quebec and the Gaspé Peninsula. I’m delighted by the experience but sad it didn’t last longer. The thing about motorcycle touring is that it’s always bittersweet. On the one hand, you want to see, do, and ride it all because you don’t know if you’ll be back. On the other hand, there’s the realization that you can’t.

But that’s me starting at the end. Let’s start at the beginning.

I wasn’t in Quebec long before I came across a vague road sign indicating a motorcycle hazard. I had no idea what it meant nor what I was supposed to do. It gave me a hint that riding in Quebec, and not just because of its language, would be a bit different. It was, in mostly wonderful ways: its hospitality, its history, its people, its scenery, its culture, its cuisine, its maritime traditions, and most importantly, its many serpentine roads. 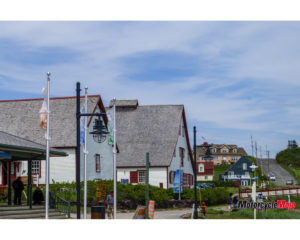 You’ll notice I said mostly wonderful ways. I came across road construction on a two-lane highway. My lane was closed, and the flagman directed me onto the shoulder, into 40 cm of water-saturated, tire-sucking, bike-toppling muck. I geared down and gunned it. As my non-nobbied street tires squirmed and skidded their way forward, I saw the 2.5 metre drop-off to the water-filled ditch a half metre to my right. “Eyes up! Look where you want to go,” I heard my police riding instructors yell at me. I focused ahead and manhandled my bike out of the mire. It was a short but sporting detour. Road construction, Quebec-style.

Later, I came upon an alternate-route detour. I had a blast riding the twisty roads and seeing the scenic Laurentian villages I would have otherwise missed if not for the detour, but then I came to an intersection that looked a little too familiar. I had entered the same intersection from which the detour started, from the opposite direction. I wondered how this happened. Was it me, or more road construction, Quebec-style?

A storm had arrived, so I quickly found a campground and set up camp. It was nowhere near my planned destination of La Mauricie National Park.

The campground was new. The tent-camping area, built on a reclaimed marsh, was enveloped by the remaining wetland and was bordered by a pond. Donning my critical mosquito head net, I cooked dinner and then went to the lake to watch the sunset and take some pictures. Back at my campsite, I could hear a…