The Honda RC30 has gained legendary status over the years and, therefore, has become rare and expensive, at least for most of them.

At the 2019 Mecum Las Vegas motorcycle auction, a 1988 Honda RC30 sold for $121,000. Admittedly, that’s something of a high water mark for the rare model, which had only a single mile on the odometer and had never been started. Yet other RC30s have sold through Mecum and those prices range from $24,000 to just a bit more than $54,000. All this is to say that if you go simply by those auction results, the RC30 could be considered an “expensive” motorcycle.

But to Jon Paskett of Bragg Creek, Alta., his 1989 Honda RC30 is an “inexpensive” bike. “That’s because I see it for what I paid for it,” the independent motorcycle mechanic explains. “I simply see it as a cheap bike — at least, that’s how I justify it to myself.” 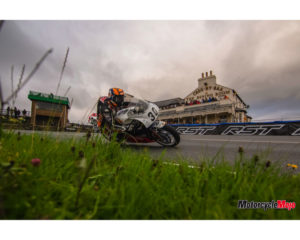 Paskett was born and raised in England’s industrial heartland of Coventry, once the centre of the British motorcycle industry. He grew up tinkering with bicycles and then motorcycles, first hitting the public roads aboard a 50 cc moped before graduating to larger and faster machines. He started as an apprentice in a machine shop before becoming a motorcycle mechanic. He’s worked for race teams, including World Superbike Champion Troy Bayliss and multiple Isle of Man TT winner Phillip McCallen.

During the early 1990s, he also turned wrenches for Triumph in their Hinckley factory and as a red seal mechanic in numerous London shops.

But going fast on a track aboard a motorcycle also held a certain fascination for Paskett, and “At the time, I raced whatever was around,” he says. “That was mostly CBR600s or Yamaha YZF750s. I did all right, but I wasn’t going to make a living out of racing — I was a better mechanic.”

However, that didn’t stop him from buying his 1989 Honda RC30 in 1997. “They were pretty much old hat then,” he says of the RC30, “and they really weren’t worth much money, relatively speaking. I bought it thinking I might prepare it to compete at the Isle of Man TT, but that never happened. Life kind of took over, and I even used it as a road bike and commuted on it.”

Honda originally built the street-legal RC30 to take on the World Superbike Championship, and loosely based the model on its V4-powered VFR750. To be precise, the model is officially known as a VFR750R, and Honda produced approximately 3,000 RC30s during its four-year run, from 1987 to 1990. In the hands of racer Fred Merkel, the RC30 won the 1988 and 1989 World Superbike Championships. Other racers successfully campaigned RC30s on tracks around the world, and the bike took on something of a legendary status for its…