Ducati proves it can play with the big kids in the heavy-weight dual-sport market.

It seems everyone is making an adventure bike these days. However, their sizeable dimensions and heavy weight mean that, while they can handle some rough stuff, they’re challenging to ride in difficult conditions. This is why the majority of today’s larger-displacement adventure bikes (over 800 cc with multi cylinders) spend most of their time on pavement. Sure, some riders might wander regularly onto gravel roads, but let’s face it: even a Gold Wing can do that.
There are, however, a few bigger bikes designed to handle more serious off-roading, bikes like the Honda Africa Twin, the Husqvarna Norden 901, and its cousin, the KTM 890 Adventure R. But the manufacturers of those machines have histories steeped in off-roading; all of them have competed successfully in motocross, enduro and rally competition, and all have produced serious dual-sport machines. It’s therefore not surprising that their adventure bikes are entirely competent off-roaders.

What is surprising is when an Italian company that specializes in naked bikes, sport bikes and supersport machines produces a motorcycle that has a heavy penchant for dirt. That company is Ducati and the bike is the new DesertX. We recently got a chance to ride it at its North American launch, held near Aspen, Co. 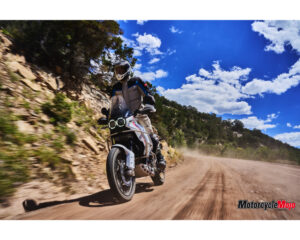 While most Ducatis look like they’re ready to hit either winding mountain roads or the nearest racetrack, the DesertX looks like it’s ready to tackle the Dakar Rally. It boasts a rally-inspired, frame-mounted fairing, long-travel suspension, and off-road-ready wheel sizes. This might seem unusual for a company that was the first to put winglets onto MotoGP bikes, but Ducati actually has some off-roading lineage, though it is from a while ago: Back in 1990, Italian rider Edi Orioli won the gruelling Paris-Dakar rally aboard a Cagiva Elefant, a feat he repeated in 1994. Ducati was under Cagiva Group ownership from 1985 to 1996, so the Elefant was therefore powered by a 900 cc Ducati V-twin. Now you know.

Ducati first revealed a DesertX concept at EICMA in 2019. Although that concept was based on a Scrambler 1100, the DesertX is an entirely new machine, and its engine is based on the Monster’s liquid-cooled, 937 cc Testastretta 11° V-twin, and not on the Scrambler’s air-cooled 1,079 cc engine. You’ll find the same engine in the Hypermotard, Multistrada V2 and Supersport, however, Ducati has reworked it for the DesertX. It claims 110 horsepower and 68 ft-lb. of torque, and changes include dedicated ride and power modes, and altered transmission gearing.

First through fifth gears are shorter than in those other bikes (sixth remains unchanged for highway riding), while…