“We hunger in earnest for that which we cannot consume:” a perfect synopsis of the allure of forbidden fruit from otherwise forgettable romance writer Nenia Campbell. And while she might have been pontificating on vampire romance — yes, there is such a thing — it speaks to our universal desire for all that we can’t have.

At least that’s what I was thinking when I walked into Stilmoto motorcycles in the tiny little northern Italian town of Sondrio. There, with pride of place in the centre of the showroom, was Honda’s elusive NT1100. Now, for those not in the know, the NT1100 is a bit of a parts bin special. Basically, Honda takes the CRF1100 Africa Twin — which remains the best of the Japanese big-bore adventure bikes — and slaps on sportbike-spec 17-inch wheels and, speaking of alluring, some pretty sexy bodywork. The rest of the bike — the CRF’s 1,084-cc “Unicam” parallel twin and the twin-spar frame. It is, for all intents and purposes, an Africa Twin in a new dress and shoes. That has done nothing to dampen my envy and ardour. Not at all. In fact, I’ve been lobbying Honda Canada for almost a year now to get me in the seat of the NT since, as most pundits agree, the NT is surely destined for North American shores sometime in the near future.

An Offer I Can’t Refuse 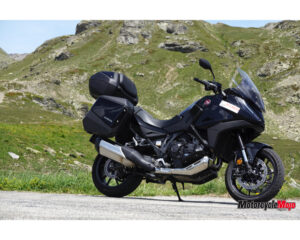 Well, in a plot even the schlocky Ms. Campbell wouldn’t dare write for fear of straining credibility, when I casually mentioned my covetousness to the dealership owner, Matteo, he a) knew what covetousness meant (most Canadians would struggle, never mind a motorcycle salesman for whom English is probably a fifth language) and b) he was willing to fulfill my quest for forbidden fruit.

In fact, it was his suggestion. Yes, a full year of constantly pestering in Canada was overtaken in Italy without me even having to ask “Can I ride your bike?” For those trying to decipher why motorcycling is more popular in the Bel Paese — quite literally, the beautiful country — than here in Canada, look no further.
So, with nothing more than a promise that yes, I would take at least one picture of his pride and joy with a Stilmoto sticker front and centre, Matteo sent me off to the Bernina Pass — think of the Tail of the Dragon, only without the law…