Experiencing some of what Wisconsin has to offer the roaming traveller.

Interstate 94 around the southern shore of Lake Michigan alternated every 90 seconds between breakneck racetrack and world’s longest parking lot. And with ambient temperatures of 39 C (the first heat event of the season), I began to dread the latter while also seizing the opportunity to sip more water. When the endless searing concrete of Chicago was finally behind me, however, I began to drift across the southern Wisconsin prairie — smooth and green with young corn and first-cut hay. The smell of clover and trefoil was intoxicating.

My journey was part of a long-term test ride of the new 2022 Suzuki V-Strom DL650XA, and it is no stretch to say that I loved it. I found the transition from my own 2nd generation 2016 seamless, with a familiar feel that somehow seemed even better. Suzi II had replaced my beloved Suzi, a 1st gen 2006. And now Suzi Blue was again raising the bar. I was pleased with the new camshaft design, which provided more power in the higher rev-ranges, especially on I-94 where passing other vehicles involved speeds over 120 km/h. Even fully loaded, the bike never left me wishing for more muscle. And while the fuel tank was still
83.5 cm wide, the dash had continued to become more streamlined with each generation. The instrument cluster remained at 17.75 cm, while the tach was larger, with more information available — a definite plus.

Not Your Regular Inn 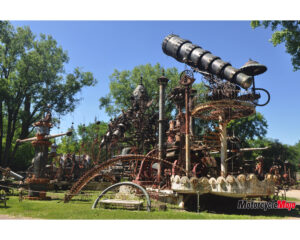 The front of the seat was also narrower, making it easier for this short-legged rider to get both feet flat on the ground. Which is exactly what I did in the town of Milton, where I detoured to see Milton House, once a stagecoach stop and now a National Historic Landmark. In the early 1800s, what patrons did not know was that other “guests” sometimes hid below the inn: African Americans fleeing slavery and using a secret passageway as refuge along the Underground Railroad.

My first night’s lodging was with lifelong friends in Madison whom I had not seen since well before the pandemic. As a point of conversation, my host observed that, just like the last time I had visited, fuel prices were spiking. I was startled the next morning to put my feet down on a very wet carpet and to discover their water heater had burst. After helping them move every cardboard box and wet piece of furniture to the deck (and a nevertheless-sumptuous breakfast), I thanked them and promised to leave before fire or locusts…